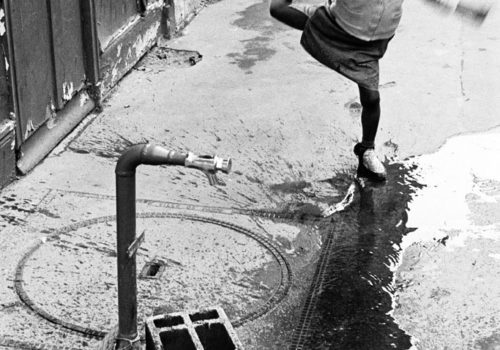 In 1996, the Prix HSBC pour la Photographie (then named the Prix de la Fondation CCF pour la Photographie) named its first two winners, Eric Prinvault and Henry Ray. For the inaugural edition, Christian Caujolle was chosen to be the artistic advisor. Today we’re looking back at Eric Prinvault’s award-winning work on the homeless, giving us the opportunity to reflect on the experience and what it has since become.

For the retrospective of the 20th anniversary of the Prix HSBC pour la Photographie, L’Oeil de la Photographie will be presenting you every week with two “episodes,” introducing you to the past winners of the prize and where they are now.

L’Oeil de la Photographie : The Prix HSBC pour la Photographie turns 20 this year. It is awarded annually to two photographers to help them complete a project that will be exhibited and published as a monograph, often the artist’s first. What was your experience with the prize?
Eric Prinvault: Being the winner of the Fondation HSBC pour la Photographie was a great joy, of course. But above all, it was a recognition of my approach to photography and the opportunity to exhibit my work, to raise awareness about it and to leave a trace with my first monograph, C’est où la maison, published by Actes Sud.

LODLP : Can you tell us about your winning project? Has the prize had an influence on your subsequent work?
EP : The prize allowed me to continue work on a project about the situation of Roma in Eastern Europe, La route des Roms, and exhibit it in France, Japan and Spain. I don’t feel like an artist, but rather a documentary photographer working on social and ethnographic subjects in the tradition of the humanist photographers.

LODLP : Apart from the monograph, what impact did the prize have on your career? And what is your relationship like with HSBC today?
EP : For the past 20 years, I have witnessed, along with my colleagues, the crisis of photojournalism and documentary photography, the impoverishment of our profession, with the advent of digital, the internet explosion, and the dip in commissions from the press. Today, I still have friends at the Fondation HSBC pour la Photographie, but my profession has become a daily struggle to survive and keep shooting.

C’est où la maison ?
“Work by Eric Prinvault studies with care (and without indulgence) those who have to choose the streets as their home and those who have lost their homes. If he has avoided following the anecdotal news of wars and movements, it is to immerse himself more deeply into the life of the inadequately-housed, the deported, migrants in precarious situations. In the middle of these problems, he places individuals – people of different nationalities, predominantly African –  he photographs them to document the crisis that appears as one of the “new problems of society”. He is not indifferent with the approach he takes, contrary to the majority of superficial and contemporary approaches of photojournalism, time as an enemy. Eric Prinvault spends time with his subjects, sometimes spending weeks with one group before creating even one image and, with the simple courtesy of creating relationships of trust and exchange, offers photo memories to those who he has photographed (…).
In a non-spectacular way, always becoming attached with those he photographs, Eric Prinvault makes a commitment to the world of photojournalism.”
Christian Caujolle – Conseiller artistique 1996