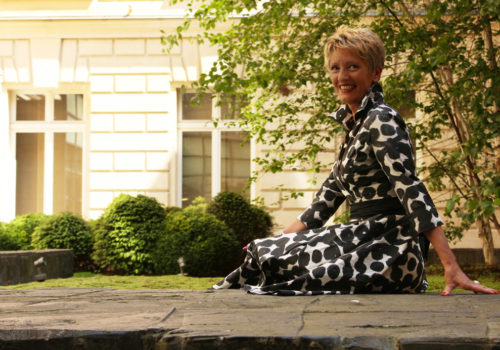 This year the Prix HSBC pour la Photographie is celebrating its 20th anniversary. Every Wednesday, we’ll be taking a look back at the history of the prize and its winners since Chantal Nedjib founded it in 1995. This week we’ll get the ball rolling with the first two winners in 1996: Eric Prinvault and Henry Ray. But first we spoke with Christine Raoult, Executive Director about the history of the prize. .

L’Oeil de la Photographie: In 1996, the CCF launched a prize to honor two photographers per year. What was the goal of the prize and how was it seen by photo world professionals at the time?
Christine Raoult: Twenty years ago, when the Prix HSBC “ex CCF” pour la Photographie was created, very few patrons were involved with photography. It wasn’t yet considered a major art. The company has been involved with the photo world for the past 28 years. We were looking for a field of expression that matched our own values, a contemporary medium, something both attractive and accessible. Photography met all of our expectations.
We started out by giving carte blanche to some major photographer to illustrate our annuals reports. It was an offbeat and unexpected look for a bank. For nearly four years, we developed a partnership with the Centre National de la Photographie. We wanted to make a stronger and proactive investment in photography, especially through the support of young talent. We commissioned a study to identify the ways we could help them. After interviewing various institutions, gallery owners, artists and other professionals, we learned that one of the biggest difficulties facing photographers was the cost of publishing a monograph, and the risk involved for its publisher. It was a need that was concrete and real! Thus the Prix HSBC pour la Photographie was born. The first few years were difficult but the response from the photo world was very positive.
Since the creation of the prize, we have been lucky to be surrounded by committed people who have agreed to stick by us in this adventure: Actes Sud, our artistic advisors, the galleries, art centers and so on. The Prix HSBC is alive today thanks to them. Our commitment , supporting two talented young artists each year by helping to develop and promote their work in the professional and artistic milieu is related to the realization that the success of younger generations is a real issue for today’s society. It was through this act towards sustaining photography and the work of photographers that we hope to contribute to the development of this form of artistic expression.

LODLP : The prize turns 20 this year. It has recognized the work of 40 winners with the help of 20 artistic advisors, all with different backgrounds and visions of the world. What is your assessment of this diversity. How have you incorporated this over the years in your selection process?
CR : The diversity of the visions and backgrounds is without a doubt what makes the Prix HSBC so powerful and rich. Since the beginning, we have appealed to a different specialist every year, offering varied visions and experiences but always with the same requirement: to find out the best trends in contemporary photography.
Each artistic advisor is responsible for finding a dozen candidates, each the most representative of their artistic approach. The choice is made according to their perceptions, experiences and sensibilities. The adviser offer a selection to the members of the executive committee, which is half HSBC collaborators of different backgrounds, and half personalities from the art world (not limited to photography). This plurality of visions and knowledge also plays a role.
This wide diversity makes each new edition different. They become “encounters” full of exchanges and  sharing of new experiences. Remember that what sets this award apart is that it is not just financial support, but a genuine work of human and artistic support for the winners over a course of a year.

LODLP : In the early years, the prize recognized the work of up-and-coming artists, but many were already fairly established. In the past few years, we have witnessed a “rejuvenation” when it comes to the winners. Some of them are barely out of school. Does HSBC endeavor to support the work of emerging young photographers?
CR : Since the creation of the prize in 1995, we have worked to support and promote the work of young photographers. We’ve had many winners whose careers were only just getting started: Carole Féketé, Catherine Gfeller, Eric Baudelaire, Milomir Kovacevick, Patrick Taberna. This mission never changed, but the profile of the candidates has evolved somewhat over the past ten years or so. They understand their lives as photographers differently: the way one learns the craft has evolved, the way one approaches one’s career, technology, they don’t hesitate to apply for scholarships and prizes to allow them to continue their work. It has become a key element for the recognition of an artist.

LODLP : You recently announced new international and long-term support for winners in order to give them more visibility. Can you tell us a little more about it?
CR : This year the Prix HSBC pour la Photographie turns 20! We thought a lot about the best way to celebrate the anniversary and the best way to thank everyone who has supported us throughout this great adventure. It seemed obvious to us that the best way to celebrate our 20th anniversary was to strengthen our commitment to young talent!
The year 2015 will see a level of support with three new features:
–international exposure: the exhibition of the winners’ work beyond French borders seemed essential to the recognition of their work and the advancement of their careers.
–increased venues: adding a fifth venue gives the winners more opportunity to meet with diverse audiences and gives them greater visibility.
–help with production throughout the year: after speaking with past winners, we learned that the full year of support is so rich and intense that they produce so much and are left with little after 18 months… These new works will be presented during the last stop of the trip, giving new impetus to their careers.

In summary, we’re offering more support than ever:
–The publication of a first monograph by each artist in the Actes Sud collection “Prix HSBC pour la Photographie”
–Organizing a traveling exhibition with the work of five cultural centers in France and abroad.
–Helping with the production of new images, presented during the fifth stop in the tour
–HSBC acquires a minimum of six works by the winners for its photographic collection. Maia Flore and Guillaume Martial, winners of the 2015 edition, will be the first to benefit from these new features.