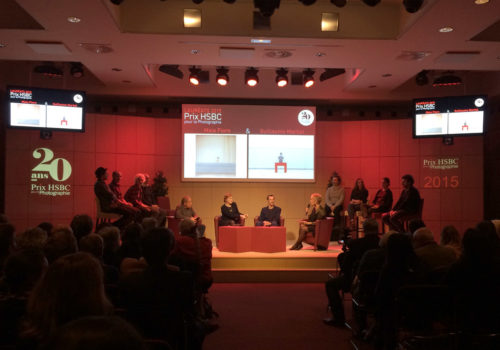 This year, the Prix HSBC pour la Photographie is celebrating its 20th anniversary. Created in 1995 by the Fondation CCF pour la Photographie under the aegis of the Fondation de France, the Prix supports the work of two up-and-coming international photographers with an annual award. Their work is then featured in a traveling exhibition in Paris and elsewhere, and in a monograph published by Actes Sud. HSBC France also purchases at least six photographs from the winners. The year 2015 will also mark the beginning of even more extensive support for the traveling exhibition, with the addition of production help for the exhibited works during a final exhibition in Lille.

This year’s artistic director is François Cheval, director of the Musée Nicéphore Niépce. From the hundreds of submissions, twelve were selected for the prize’s executive committee. The winners were 27-year old Maia Flore and 30-year old Guillaume Martial, two French photographers.

L’Oeil de la Photographie: François Cheval, as artistic director of the 20th edition of the Prix HSBC pour la Photographie, your role was to select, with the executive committee, the 12 finalists* for the prize. Can you explain to us how you made the selection?
François Cheval: It seems obvious to say that we proceed by elimination. I should explain instead what we were looking to showcase. How many portfolios there were whose realism hurt our understanding of reality! The suffocating presence of what each of us can see and understand becomes hard to bear with repetition. The everyday world, this space of exhibited intimacy, is rarely made sublime. In black and white or color, many struggle with the heritage of photographic proximity, and many of them still think that a close-up view of the commonplace is a creative act in itself.
This failure and lack of distance separate those who actually experience the subject—more so than the photographers themselves—and others who use the subject as a material to invent new forms.
The photographers who were selected share this appetite for the infinite possibilities of the photographic act. Most of them are not purely documentary. Without denying the specificity of the medium, they play with the signs. Often, they harm them in order to create a particular world.

LODLP : From among the 12 finalists, Maia Flore and Guillaume Martial were named the winners. What did their work have that set them apart?
FC : Maia Flore and Guillaume Martial bring a breath of fresh air to French photography, which desperately needs it. Without lumping them together, their debt to poetry and culture seems apparent. Reality is a subject that should bend to the photographer’s will and his or her presuppositions. Nothing can resist the latter. For Maia Flore, lighter than air, through the looking-glass. For Guillaume Martial, the power of absurdity and futility. All while preserving the characteristics of contemporary French photography (serial, dialogue between color and black and white, scholarly reflection of the format), they favor original narratives. They never forget for whom they are photographing.

LODLP : Le Prix HSBC pour la Photographie is celebrating its 20th anniversary this year. With its forty past winners, what vision do you have of the prize on the French and international photography scene?
FC : Over time, the Prix HSBC has emerged as the means of support for demanding artwork. The winners aren’t just young people. They’re photographers who have already laid the foundations for a body of work. This award gives them a boost of confidence.

In mid-February, L’Oeil de la Photographie will be covering the opening of a retrospective looking back at the 20 years of the Pris HSBC pour la Photographie in 40 separate episodes, one for each winner. Every week we’ll introduce you to the photographers who have written the history of the prize.