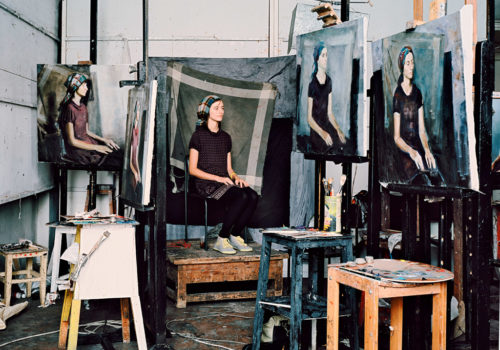 In 2012, the Spanish historian and exhibition curator Rafael Doctor Roncero served as the artistic advisor for the Prix HSBC pour la Photographie. The young British photographer Leonora Hamill and the Frenchman Eric Pillot were awarded the prize. For this latest installment in our series, we asked both winners about their experience with the prize.

L’Oeil de la Photographie : The Prix HSBC pour la Photographie turns 20 this year. It is awarded annually to two photographers to help them complete a project that will be exhibited and published as a monograph, often the artist’s first. What was your experience with the prize ?
Leonora Hamill : I had an extremely positive experience both on a professional level and on a humane level. I became good friends with my co-winner Eric Pillot and really enjoyed spending so much time with the HSBC team. Everybody was supportive and enthusiastic about our respective practices and I enjoyed every minute of it.

LODLP : Can you tell us about the project you submitted? What impact has the prize had on your artistic life ?
L. H. : Art in Progress is inspired by art schools across Europe, Asia, Africa and the Americas. The series, which started in 2009, consists of images of studios where the students work. Shot with a large format camera and printed analogically, the images are intentionally detailed, frontal and neutral. I have a certain way of confronting myself with reality and that is conveyed by frontal images, and by a cold aesthetic that offers the spectator the possibility of visually navigating a space that is simultaneously contemplative and dynamic. Despite their absence, the students remain present through the spaces they have occupied, the objects they have engaged with, and the work they are in the process of making. The spaces exude a palpable sense of collective energy. The objects that are scattered throughout the studios often belong to the Western canon of history of art and constitute a web of cross-references, which acts as a unifying device throughout the series. The studios, ranging from Saigon to Saint Petersburg and Bombay to New Haven, condense the presence of students, the passage of time, and the production of art, creating an intensely stratified space.
The prize has had a huge impact on my artistic life. It legitimized my practice in the eyes of others, I am taken more seriously as an artist since winning . It has also given my work significant exposure and I am proud to be part of the HSBC winners family.

LODLP : How did HSBC support you during this adventure? And what is your relationship like with them today ?
L. H. : HSBC were extremely supportive. They were very respectful about my production process and made it possible for me to produce the touring exhibition in the best conditions possible. They were thorough about the publication and gave us the opportunity to be present during the printing process which gave us significant control over the outcome. Ties were created by spending time together over a whole calendar year and to this day a certain degree of loyalty remains.

“This genre is a broad cataloguing process of spaces constructed or inhabited by people. A study of the human condition through a tangible typology of their spaces: art schools and their artists’ workshops. Over many years throughout the world, Leonora Hamill has photographed all these places where people learn about art in a variety of different ways. Simply looking at these workshops is not enough to highlight the particular interpretation method that the artist will adopt in the future regarding the society in which he or she lives. In this work the collective nature of artistic labour in their former stages predominates, as opposed to the generalised notion according to which the artist is isolated and independent. It is without doubt a great work, to which a significant social element is added, in which one perceives the search for a bold aesthetic capable of representing in the most direct manner those spaces typically overloaded with elements and form.”
Rafael Doctor Roncero, Artistic Advisor 2012