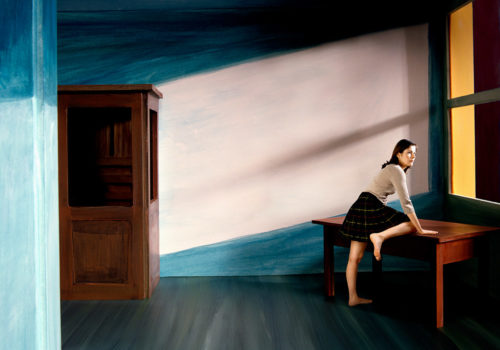 In 2006, Le Prix HSBC pour la photographie appointed Gilles Mora, director of Oeuvre Photographique collection from the French publishing house Éditions du Seuil, as its artistic advisor. The two winners of this 11th edition were Marina Gadonneix and the art duo Clark & Pougnaud. For this latest installment, the painter Virginie Pougnaud and photographer Christopher Clark answered our questions about their award-winning work and their subsequent career.

L’Œil de la Photographie : The Prix HSBC pour la Photographie turns 20 this year. It is awarded annually to two photographers to help them complete a project that will be exhibited and published as a monograph, often the artist’s first. What was your experience with the prize ?
Clark & Pougnaud : We experienced it as a great opportunity. Not having attended a photography school, we didn’t belong to any “network,” so the recognition of our work by a jury of professionals and nonprofessionals convinced us that our work could reach a wider audience. We were already represented by a gallery in Paris and Chicago, but it was very difficult for French photographers to live off the sales of their work alone. The Prix HSBC gave us visibility that no agent could offer.

LODLP : Can you tell us about your winning project? Has the prize had an influence on your subsequent work ?
C & P : We didn’t submit a specific project, but rather a set of photographs that ranged from the beginning of our collaboration in 1998 through 2005. We’ve always worked the same way together, so there was a coherence to the work, even though they were taken from several different series. The prize helped us continue what we were doing. It had no influence upon our work.

LODLP : Apart from the monograph, what impact did the prize have on your career? And what is your relationship like with HSBC today ?
C & P : Thanks to the award, we were approached by many people and exhibited at the Rencontres d’Arles. For some collectors who liked our photos but who were reluctant to buy them, the prize reassured them. It was a little bit like a diploma for us, who are self-taught. We’re not like other people in terms of the Zeitgeist. We like our work, but we don’t see it as work. Rather, we see it as a passion to which we devote all our thoughts and energy, but it’s not enough.
To live off your pictures, you have to share them with the public, and that’s what the foundation helped us accomplish over the course of a year. They took out ads, brought in journalists, put together an exhibition, organized all the logistics of overseas travel and so on. It was wonderful.
Afterwards, you have to come back to reality. Chantal Nedjib, who was in charge of the prize, told us: “It’s up to you to take the prize and do something with it.” And she was right. Our career evolved along with the art market, which is very tense. French artists struggle to carve out a place for themselves because they aren’t supported enough by the national market. We really felt the 2008 financial crisis because most of our work was being sold in North America.
Nevertheless, against all odds, we’ve never given up, even if we’ve sometimes thought that we’d have to. We must have a lucky star. We often tell ourselves that age has nothing to do with an artist’s work. We always have so many things to say through photography, and no desire to give up. Kandinsky wrote: “The artist must be blind to ‘recognized’ and ‘unrecognized’ form, deaf to the teachings and desires of his time. His open eyes must be directed to his inner life and his ears must be constantly attuned to the voice of inner necessity.”
That’s what we’re trying to do. Our relationship with the foundation has been great. We’ve stayed close. They help us out when we need it. They know it’s a tough profession. They’re still supporting us after all these years.

« Solitude, a very perilous theme in traditional photography, can deliver the most extraordinary effects in the hands of an artist capable of approaching it with humour or with critical distance… Clark & Pougnaud – photographer and artist – combine their particular skills to create a theatre of solitude that deliberately evokes pictorial references. These two artists, experienced in digital montages and experts in classical and modernist painting, pay homage to the painters and other artists who created so many famous icons on this subject, through the theme of loneliness. Edward Hopper, the “Wizard of Oz”, and the producer Jacques Demy are all gathered to create this colourful image full of wit and of cultural intelligence, through a contemporary form of “staged photography”. The result is a genuine technical feat that places their characters in virtual decors, the fruit of digital technology and mastery of the photographic art. »
Gilles Mora – Artistic Advisor 2006