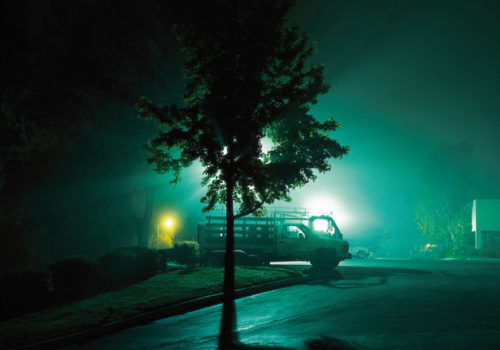 In 2010, the Prix HSBC pour la Photographie celebrated its 15th anniversary. For this edition of the prize, the art critic and curator Bernard Marcelis was named the artistic advisor to review the hundreds of submissions and select twelve of them. The three winners were all French: the duo Lucie & Simon and Laurent Hopp. Hopp was 36 at the time he was awarded the Prix HSBC. We spoke with him about his experience with the prize.

L’Œil de la Photographie : The Prix HSBC pour la Photographie turns 20 this year. It is awarded annually to two photographers to help them complete a project that will be exhibited and published as a monograph, often the artist’s first. What was your experience with the prize ?
Laurent Hopp : Receiving this prize was a mark of recognition and pride. It was also a wonderfully human and professional experience, with the preparation of the monograph with Actes Sud, the various exhibitions and the people I met: Bernard Marcelis, my co-winners Lucie & Simon, and the whole HSBC team. I have very good memories of these shared moments, the fun and enriching discussions. After spending years of lonely nights taking photos, concentrating on light and framing, it was exciting to share  and have sustained group attention directed at my work.

LODLP : Can you tell us about your winning project ? Has the prize had an influence on your subsequent work ?
L. H. : Sublunaires is a series of nighttime photographs shot in urban and suburban landscapes. I have always been fascinated by light and the way in which it reveals space and conceals volume. I started the series in 2001 when I finished art school. I was more attracted to installations, mixing in projections and light, but photography wasn’t my main focus.The
outside world became my studio, nighttime my framework, and photography my primary medium. I took the word “photography” literally, “to write with light.” Before you use chemicals, light reveals a space and defines its own frame. For me shooting is a position one takes in a space integrating what can be seen within and without the image.
As for its impact on my professional life, the monograph gave me visibility and credibility. Preparing the book was especially interesting. I really got to collaborate with the teams at Actes Sud, and I felt respected and supported by members of the HSBC team in my choices.

LODLP : Apart from the monograph, what impact did the prize have on your career? And what is your relationship like with HSBC today ?
L. H. : The HSBC team was really kind and paid great attention to me. It was a real pleasure to work with them. They brought great energy to the project. You can tell they really want to help every HSBC winner succeed. I’ve kept in touch with the team, and it’s always nice to see them at the annual awards ceremonies. Thanks again.

“In Laurent Hopp’s work you never quite know whether you’re dealing with landscapes or moods: Both seem inextricably linked. These photographs exude a climate, the peculiar climate of frontiers: between territories, but between luminosities too. We’re in an urban environment, or a peri-urban environment. Or are we? The tell-tale signs are deliberately encrypted. Is it dusk or is it dawn? Look how the night interacts with the strange colours of the artificial lighting! The roadways from the junctions seem to just fade out, somewhere indeterminate, so we’re left in a perplexing nocturnal universe, the fuzzy boundaries of which we assume can only merge with nature, strangely familiar however improbable. Curiously, the vegetation is the dominant feature of these semi-urban scenes, enveloping everything and attenuating the impact of the light from the lampposts or the neon tubes. If these shots had been taken in winter they’d have a completely different feel, stripped of the powerfully peculiar atmosphere that emanates from the surrounding nature, for all its artificiality. In these deserted summer night streets, the deep, dense greens mingle with blatant ambiguity among brittle tones up to an almost glaring red. If these cardboard-cut out territories, on the outskirts of town, with their straight, empty roads and ghost buildings, intrigue us as they do, it’s doubtless because they seem almost too real to be true, like film sets.”
Bernard Marcelis, Artistic Advisor 2010