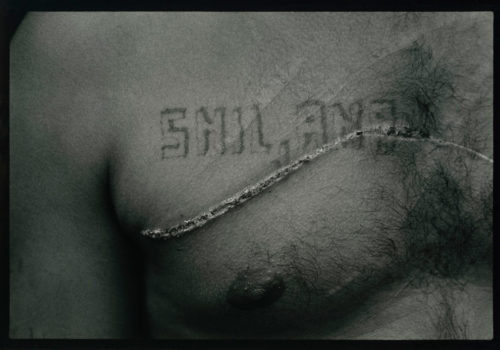 Jérome Sans, art critic and curator, was appointed artistic advisor for the Prix HSBC pour la Photographie (then called the Prix de la Fondation CCF pour la Photographie) in 1998. For the third edition of the Prix HSBC, the Yugoslavian photographer Milomir Kovacevic and the American photographer Seton Smith were awarded the prize. Today we’re looking back at Kovacevic’s black-and-white series on Yugoslav prisons, and gave him the opportunity to tell us about the experience and how his career has evolved since.

L’Oeil de la Photographie : The Prix HSBC pour la Photographie turns 20 this year. It is awarded annually to two photographers to help them complete a project that will be exhibited and published as a monograph, often the artist’s first. What was your experience with the prize?
Milomir Kovacevic : It didn’t change my work habits, which I had been developing over a long period. However, this distinction is very important for me, because it was very encouraging and confirmed for me that I was on the right track.

LODLP : Can you tell us about your winning project? Has the prize had an influence on your subsequent work?
MK : It had no influence as such. It was the project that defined my working method. First, I had to work very quickly. We were only given one day in each prison. I had to make quick decisions while working very quietly. This set of photographs—around 500 shots—represents only six days in my life, but it was nonetheless a very powerful experience.

LODLP : Apart from the monograph, what impact did the prize have on your career? And what is your relationship like with HSBC today?
MK : Publishing the book and holding an exhibition allowed my work to gain visibility and reach a wider audience. The existence of a foundation like this lets one stay informed and promotes the creation and development of a network of photography professionals in which one can make contacts.
There are many consequences, all positive. It let me meet a lot of people in the photo world, including several members of the foundation and other winners, some of whom became friends.

“Milomir Kovacevic’s work is interesting in the way that it speaks to others (…). If these photographs are very rare documents on Yugoslavian prisons from this era and they denounce a detention system which is rigid and archaic, the last castle of a totalitarian ideology, the interest in these photos essentially rests in their physical and pictorial quality. Today he is a political refugee in France and has been since 1995, and he is working on another form of exclusion, that which is his own, immigration“.
Jérôme Sans – Conseiller artistique 1998