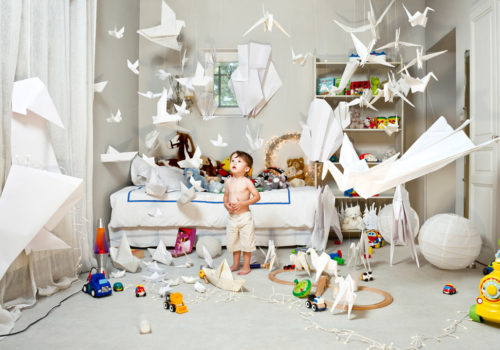 Our series on the Prix HSBC pour la Photographie has almost reached its end. This year, we’re showcasing the work of the two winners of the 2013 edition. Emmanuelle de l’Ecotais, art historian and head of the photography collection of the Musée d’Art Modernes de la Ville de Paris, was chosen as the artistic advisor. Two young French photographers, Cerise Doucède and Noémie Goudal, were named the winners. We spoke with Cerise, now 28 and based in Toulon, about her experience with the prize.

L’Oeil de la Photographie : The Prix HSBC pour la Photographie turns 20 this year. It is awarded annually to two photographers to help them complete a project that will be exhibited and published as a monograph, often the artist’s first. What was your experience with the prize?
Cerise Doucède : It took me a second to realize that I really had won. It was an important mark of recognition for my work. It’s extremely rewarding to have one’s work recognized by professionals. Artists never stop doubting themselves, and the prize gave me confidence to continue believing and move forward. It was a wonderful experience and the year went very quickly. I had never hoped to have a monograph at the age of 26, especially one published by Actes Sud. Beforehand I had only exhibited in Paris, and the prize also gave me the opportunity to exhibit elsewhere in France. I have an especially fond memory of an exhibition in Toulon, my hometown , where I live now. A lot of people were there whom I had photographed, including my grandfather and grandmother. It was a way of thanking them for their patience. It was a wonderful opportunity and I hope future winners will be able to benefit from it as much as I did.

LODLP : How did HSBC support you during this adventure? And what is your relationship like with them today.
C. D. : It was a series called Egarements featuring portraits of people going about their daily lives who, through installations, find themselves projected into the world of their thoughts, which materialize and come to life around them. Artistically, the prize gave the work more power, since in the book the process was more obvious. It also helped me to turn the page and put an end to the series. I saw all the photos together at once and thought, “Well, that’s it, I can move on.” I also felt that my photographs “ripened” thanks the prize, and in hindsight, that’s what I needed. Right now I’m working on a new series, still involving installations, but with a new theme that’s more down-to-earth. I’m leaving the dream world and returning to reality. What’s certain is that my work still revolves around objects, people and the link between them.
I was supported the whole year by a wonderful team mostly made up of women. Everything ran like clockwork and it was wonderful since some of the situations were stressful and I felt a great weight lifted from my shoulders. From a personal point of view, it was very rewarding and I’m impatient to see them all again.

« “My photographs are the theatre of my fantasies. They reveal the intimacy of my own story. They correspond to my world, the one that I catch a glimpse of when I observe the real world. They are sometimes the final step in a long and thoughtful process which can develop within me for days and nights on end until I find the answer!”
This is how Cerise Doucède describes her photographs. With application, precision and humour she creates installations which represent each of our dreams and obsessions (Egarements) or even fears (Les Attachés). By shaping her own visions, she reproduces her version of reality and sublimates the most ordinary moments.
Objects therefore come to life around one or more figures, in intimate locations, at key moments of everyday life, such as mealtimes for example. She therefore reinvents the art of portraits by creating scenes filled with objects suspended in these spaces, like pirouetting thoughts, each one presenting part of our individual personalities. »
Emmanuelle de l’Ecotais, artistic advisor 2013