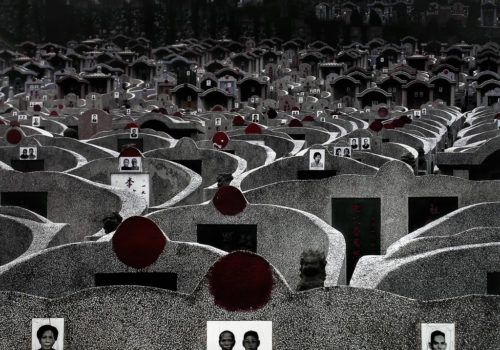 In 2004, the late Carol Brown, a British specialist of contemporary art, was appointed the artistic advisor of the Prix HSBC (formerly the Prix de la Fondation CCF pour la photographie). This year, the two winners were Malala Andrialavidrazana and Patrick Taberna. For our latest installment in this series, we spoke to the French and Malagasy photographers about their experience.

L’Œil de la Photographie : The Prix HSBC pour la Photographie turns 20 this year. It is awarded annually to two photographers to help them complete a project that will be exhibited and published as a monograph, often the artist’s first. What was your experience with the prize ?
Malala Andrialavidrazana : Malala Andrialavidrazana: The announcement came as a real surprise. Even though I had submitted with the utmost confidence in my project, I didn’t think that it would stand out among the hundreds of others. Sometimes you think you have to know a jury members or be recommended somehow in order to win a competition. But it wasn’t the case, and that made it all the more gratifying and motivating going forward.

LODLP : Can you tell us about your winning project? Has the prize had an influence on your subsequent work ?
M.A. : The series d’Outre-Monde, which I made in 2003, deals with the signs of diversity in the phenomenon of globalization, which is unrelenting, as well as our relationship to the heritage of civilizations, and the organization of a land according to the values of its communities. These are the usual themes in my work, however I address them. At the time, to approach the subject, I had visited several funeral sites as both a negative of the city and as a mirror of contemporary society. The images for the series were shot in South Africa, Asia and Oceania. I tried in my projects to focus on smaller regions, but that becomes impossible if you’re trying to bring different cultures into dialogue. My world remains here and elsewhere, at once near and far, while my works gradually pursue their own international visibility.

LODLP : Apart from the monograph, what impact did the prize have on your career? And what is your relationship like with HSBC today ?
M.A. : The award helped open doors that would have been more difficult to enter without the help of the Fondation. I wanted to take my time before starting out on another adventure for a new book. Two years ago, the publisher Kehrer finally convinced me to publish the series Echoes from the Indian Ocean, which had benefited from the support of the Institut Français and the National Art Council of South Africa. In some ways, support from other institutions has had an influence on how quickly I work. I watch the evolving styles of photography chosen by the Prix HSBC’s artistic advisors every year. I’m very happy to have formed friendships with past winners of the prize. I also have the deepest respect for the “behind-the-scenes” team at the Fondation.

« Malala Andrilavidrazana’s interest in funeral grounds began during her studies in Architecture. These photographs are part of a body of more than 7000 images taken in 2003 during an expedition in South America, Asia and Australia. For her, the cemeteries are an expression of communities which belong to a particular place; they are a “discovery of the identity of a society, or simply of an individual”. In a world dominated by mass communication and a uniformity that is more and more pronounced, the photographer finds a reassuring sign of diversity and continuity of cultural heritage in the cemeteries. »
Carol Brown – Artistic Advisor 2004