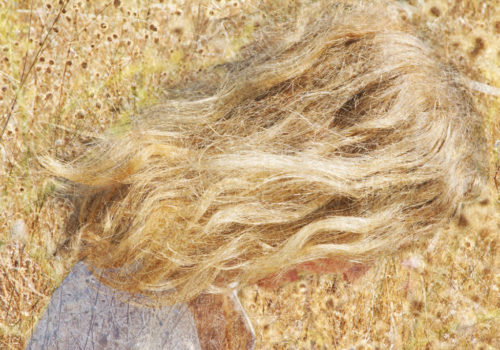 For the fourth edition of the Prix HSBC pour la Photographie (then known at the Prix de la Fondation CCF pour la photographie), Alain Mingam former photo editor-in-chief of Sygma, Gamma and Figaro, served as the art advisor. Two women won the prize that year, Catherine Gfeller and Yoshiko Murakami, Swiss and Japanese, retrospectively. Today, for the latest installment in our series, we spoke with Catherine Gfeller about her experience of winning the prize with her work Frises Urbaines and what she has accomplished since.

L’Oeil de la Photographie : The Prix HSBC pour la Photographie turns 20 this year. It is awarded annually to two photographers to help them complete a project that will be exhibited and published as a monograph, often the artist’s first. What was your experience with the prize?
Catherine Gfeller : The award was like a magic wand for me. I had just spent five intense years in New York and was moving into my studio at the Cité des Arts in the Marais in Paris. I plugged in my phone and the first call I got was from the Prix HSBC (then known as CCF). That was Paris welcoming me back from New York!

LODLP : Can you tell us about your winning project? Has the prize had an influence on your subsequent work?
C.G. : The award-winning portfolio, Frises Urbaines, was made up of photographs taken in New York. It was inspired by my endless, passionate wanderings through the streets of New York. The goal was to invent a new version of New York: a colorful, almost Mediterranean city lying flat, like an odalisque, long friezes of overlapping images—this was before Photoshop!—printed on 1.5-meter drawing paper. The buildings, people, faces and traffic came together to convey the urban pulse.
The series was exhibited at the Galerie Baudoin Lebon in Paris in 1999, the year of the prize. The collaboration with Baudoin Lebon lasted 10 years. I very much regret that the gallery is no longer involved with in-depth work by the winners of the prize. It was beneficial for everyone involved.

LODLP : Apart from the monograph, what impact did the prize have on your career? And what is your relationship like with HSBC today?
C.G. : Winning the prize also helped me get to know the big names in the Parisian photo world, with whom I am still in contact today.
Between 2000 and 2003, HSBC commissioned a series called Sur l’écran de la ville with large-format photographs printed on fabric for the six large windows of its headquarters on the Champs Elysées. It was a highly visible project that fit perfectly with the street scenes of the Champs Elysées, like a mirror held out to passersby.
I hope that in the future we’ll have the opportunity to work together again?

« Catherine Gfeller gives the opportunity to see and to experience the movement of snapshots as of “passer-by” (…). She offers them to us in fresco, chromatically put together with the rhythm of emotion, that she communicates to us through the magic of her continuous film of photos. The effect of the process is completely erased and give in its stead  the shared sensation of seen emotion.
Alain Mingam, conseiller artistique, 1999.