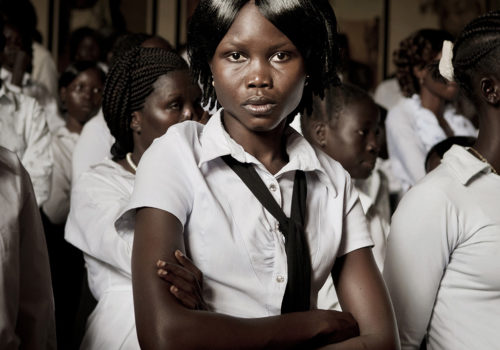 Agnès Sire is the director and exhibition curator of the Fondation Henri Cartier-Bresson. In 2011, she was named artistic advisor of the Prix HSBC pour la Photographie. The winner’s of this truly international edition were the British-Mexican artist Alinka Echeverria and Chinese photographer Zhang Xiao. For this weekly installment, we spoke with the two winners about their experience with the prize. An interview with Alinka Echeverria.

L’Œil de la Photographie : The Prix HSBC pour la Photographie turns 20 this year. It is awarded annually to two photographers to help them complete a project that will be exhibited and published as a monograph, often the artist’s first. What was your experience with the prize?
I was on an exchange program at the Ecole Superirue de la Photographie in Arles at the time and one of the professors suggested I enter the project. I had come to photography through my development work as an anthropologist, and was deeply committed to documentary work. The Road to Tepeyac, for which I won the HSBC prize, was the first body of work that broke with the parameters of that genre by decontextualising  the person being photographed in post production.

In many other ways too, it moved away from the lyrical, narrative photo essay structure we had practised in the documentary program at The International Center of Photography.    I had already photographed the pilgrimage over the course of two years, but was figuiring out how to bring to life the immersive exhibition I had conceptualised  hundreds of pilgrims.   I was extremely surprised to win, but it was a great endorsement of how breaking learnt boundaries and following my intuition was very important.  Above all, it was very interesting to show the work in different locations over the course of the year and to see how the french audience responded to it so positively. I think there is a very deep resonance with imagery from Mexico in France.

LODLP : Can you tell us about the project you submitted? What impact has the prize had on your artistic life?
The Road to Tepeyac (2010), was made over the course of two years. The project started during a visit to the Basilica de Guadalupe in Mexico City during the anniversary of the apparition of the virgin. Approximately 8 million pilgrims visit the site over 4 days.  The story of the apparition is that the Virgin appeared five times to the indigenous man Juan Diego in 1531 at the ancient site of the Aztec Goddess Tonantzin. His testimony was not enough to convince the priests that she had appeared to him, so the Virgin told him to collect the roses from the hill and take them to the bishop. He collected the roses into his tunic and when he unraveled the cloth to reveal the roses to the bishop, the image of the Virgin had imprinted itself onto his cloak. This original, miraculous image is said to be the one that is hanging in the Basilica. I was amazed by the seemingly infinite representations of the virgin that the devout were carrying.  I was brought up in a secular home, so it led me to question the relationship between image and belief – why have it? Why carry it for ten days to the original site? Why decorate it? I found the simple act of carrying a reproduction of the sacred image so rich in questions, that I decided to focus purely on this by photographing the backs of the pilgrims who were carrying images of the Virgin. The decontextualisation is intended to remove the visual pollution, and allow the reintegration of the three hundred images in the series in an immersive installation.

The series is now accompanied by a video of the visitors to the Basilica de Guadalupe looking at the sacred image. It is a fixed frame 11-minute loop.  This complements ‘The Road to Tepeyac’, but is drastically different because we don’t see the image, but rather witness the act of beholding. My interest in the philosophical, psychological and socio-cultural relationship between image and belief led me to the project I am currently working on which explores real and metaphoric blindness.  I am interested in how cultural signifiers that inform and construct our world are encoded in language and histories, and how this is based on our evolution as visual beings.

LODLP : How did HSBC support you during this adventure? And what is your relationship like with them today?
HSBC was extremely supportive and really listened to the vision I had for this extensive typology. We came up with a solution to show many of them in the catalogue which was meant to echo the immersive installation I had conceptualised.  I was very lucky to be able to work closely with Christian Caujolle and Agnes Sire, both photography professionals I admire greatly.  The relationship is still very supportive and positive, they seem very interested to see how their laureats’ career develops after the prize and make a very active effort to keep in touch.

« Each year, six million pilgrims journey toward the Basilica of Guadeloupe near Mexico. Built in the 17thCentury upon the ruins of the Tepeyac Temple, the ancient sacred place of the Tonantzin Aztecs, this church symbolises the passing through of ancient civilisations towards Spanish Colonialism. The Virgin Mary made many appearances here and her image has become extremely important for Mexicans. During this pilgrimage, these believers bring what represents the Virgin Mary from their homes, , a statue, a painting, a tapestry, and they transport these pieces to this sacred place to be blessing.

The arrival of Alinka Echeverria, a young Mexican artist in residence at Ecole d’Arles this year, is exemplary: all of the subjects (300) have been photographed journeying with their trophy, and they have then been cut out so that all that remains is their reverse silhouette carrying their precious load. Figures without faces, occasional models or simply travellers carrying a large insignia? Nobody knows if it is informed, as the decontextualisation wanted by the author allows it to become detached for individual opinions, for these bodies do not carry a difficult and heavy cross but a cherished Virgin Mary. The accumulation of subjects, the beauty and the strangeness of their harness, creates an exceptional series which allows the visualisation of this belief, the beauty of the gesture and without doubt a metaphor of Mexican surrealism. »