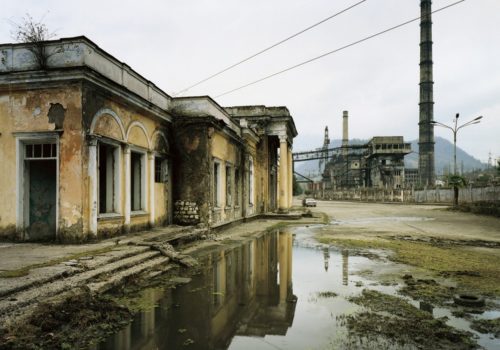 In 2005, the Prix de la Fondation CCF pour la photographie changed its name to  Prix HSBC pour la photographie. The two winners selected to inaugurate the new name were Birgitta Lund and Eric Baudelaire, and the artistic adviser was Oliva Maria Rubio, exhibition director of La Fabricà in Madrid. For the tenth consecutive week, halfway through our feature, we’ll be revisiting the award-winning works of 2005, including those by French filmmaker Eric Baudelaire.

« Imagined State is the chronicle of a place that does not exist on our geopolitical map: Abkhazia, a place that is both imagined and very real, but whose existence as a state is denied. Ten years ago, Abkhazia fought and won its independence from Georgia. Today, it remains unrecognised. Territory, country or mental space, Abkhazia is imagined by people living in limbo, frozen in a fragile de facto independence that has no legal existence. It was this sensation of paralysis and petrification that drew my attention to Eric Baudelaire’s work. These photographs give me an impression of something both real and unreal, a frozen world, people in a state of perpetual waiting, a city in construction, half destroyed, through which they move as if emerging from a story. Muddy streets, rundown classical buildings alongside old factories with tall smokestacks, drab apartment buildings, a deserted railway station, the open sky, and a landscape that is real but difficult to interpret.
Eric Baudelaire’s work deals with the tension created by this paradox of an unrecognised state: the photographic territory exists, but its meaning and status are open to interpretation »Giovanna Oliva Oliva Maria Rubio – Artistic Advisor 2005

Imagined State
The title evokes the tradition of fantastic literature, suggesting far-off places, exploits and dreams.
But Eric Baudelaire’s photographs part company with the imaginary state which this title might initially intimate. They are not the projection of the creative mind around a phantasmagorical universe: rather, they seek to give concrete form to the desire of a people engaged in an ongoing search for identity.
His Imagined State exist physically, can be located on a map, and reflect a historical and geopolitical reality. There is nothing imaginary here, apart from the imagination of the artist harnessed to serve his aesthetic experimentations.
How do you photograph a country that exists only as a state of desire, a state of consciousness? A state without borders, without a recognised flag: a theoretical state. How do you photograph Utopia, the name coined by Thomas More to describe the ideal state?
Michel Poivert