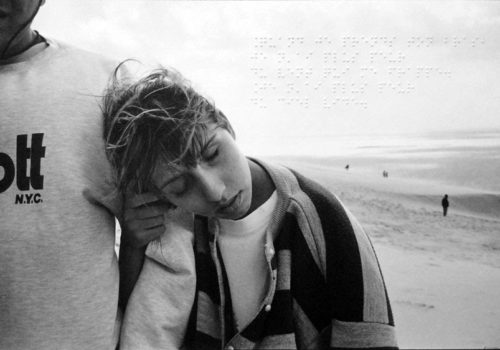 For the fourth edition of the Prix HSBC pour la Photographie (then known at the Prix de la Fondation CCF pour la photographie), Alain Mingam former photo editor-in-chief of Sygma, Gamma and Figaro, served as the art advisor. Two women won the prize that year, Catherine Gfeller and Yoshiko Murakami, Swiss and Japanese, retrospectively. Today, for the latest installment in the series, we spoke with Yoshiko Murakami about her experience with the prize, which she was awarded for her incredible black-and-white series Les mains pour voir. Murakami takes the viewer into a closed-off world where sight no longer exists.

L’Oeil de la Photographie : The Prix HSBC pour la Photographie turns 20 this year. It is awarded annually to two photographers to help them complete a project that will be exhibited and published as a monograph, often the artist’s first. What was your experience with the prize?
Yoshiko Murakami : I received this prize for the project that I presented at the end of my studies at ENSAD, when I was still a student. The prize opened many doors for me and supported me early in my artistic career: my first monograph, a traveling exhibition, interviews with the press, public debates, etc. It was a wonderful and human experience!

LODLP : Can you tell us about your winning project? Has the prize had an influence on your subsequent work?
Y.M. : Les mains pour voir was a projection about the vision of the blind. I wanted to understand how they perceived the world. Over the course of four years (1996-2000), I photographed two groups of blind people. One was a young blind and visually impaired theatre troupe. The other was a group of hikers organized by the Valentin Haüy Association for the Blind.
Without sight, it’s necessary to rely on the other senses to understand one’s environment: touch, smell, sound… The blind see in different ways. They have their own ways of seeing that do not depend on sight. But…what about vision? That remains an enigma to sighted people. By etching Braille text onto the image, I wanted to evoke the existence of these two different and parallel perceptions. The image and the Braille text are superimposed on the same surface, but they never cross. The Braille text is a mystery for the sighted, who cannot decipher it, while the image is invisible to the blind. The Braille text are poems inspired by each image.

LODLP : Apart from the monograph, what impact did the prize have on your career? And what is your relationship like with HSBC today?
Y.M. : The Prix HSBC afforded me several new experiences: commissions—including a series for HSBC Private Banks on the theme of inventors—a residency in a New York art center, as well as various other opportunities and projects.
Personally, I’m not taking many pictures at the moment. However, I started Japanese calligraphy—a homecoming?—and drawing. I’m looking for new means of expression better suited to my current desires.
My project Tracing my heart is an unfinished diary in images. The photographs were shot between 2001 and 2006, when many things were happening in my life and the world. I still haven’t decided on the final form for this series, which fully expresses my feelings at the time. Today my goal is to develop and transform this diary, with the help of drawing, into a more personal form that better expresses what I experienced. For the time being, the new phase of this work remains in draft form. In any case, even if I’ve moved somewhat away from photography, the team of the Prix HSBC is like a family I’ll never forget.

« “Les mains pour voir” by Yoshiko Murakami is an outstanding piece of work which gives the welcoming impression of fondness and modest sensitivity towards those photographed. A cliché image of “a woman in the mirror” in the position of being seen, without seeing herself, all giving the illusion of being able to see! A sense of composition and a harnessing of light which truly puts us in the position of the blind. “I wanted to know how and with what they replace light and vision”.  A successful journey into the middle of a closed world, depicted without voyeurism or pity,  the beauty of daily gestures, which brings the blind closer to us. »
Alain Mingam, conseiller artistique, 1999.