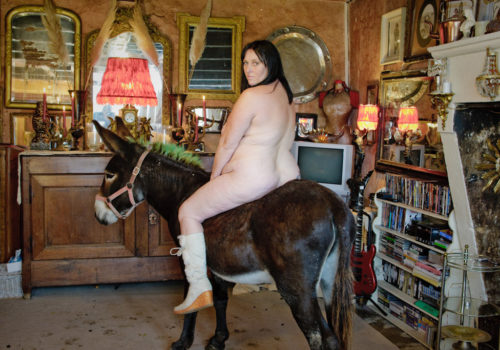 For the 7th installment in this series, we’re presenting you with the 2002 edition of the Prix HSBC pour la Photographie (then known as the Prix de la Fondation CCF pour la Photographie). Famous French publisher Robert Delpire was appointed its artistic advisor. The winning photographers were Rip Hopkins (UK) and Laurence Demaison (FR). We spoke with Rip Hopkins about his experience with the prize, which undeniably had an influence on his future.

L’Œil de la Photographie : The Prix HSBC pour la Photographie turns 20 this year. It is awarded annually to two photographers to help them complete a project that will be exhibited and published as a monograph, often the artist’s first. What was your experience with the prize ?
Rip Hopkins : When I won the prize, two things were important for me. First, the recognition, and the prize money, which allowed me to produce another work, Déplacés, about the populations forced into exile by Stalin in Uzbekistan, which was later published by Textuel. The prize served as a springboard to my next project while allowing me to get a foothold in the market. I had received other prizes before, and those helped me get involved with the Parisian gallery scene, but with the Prix CCF I increased my visibility in the market and was able to meet many people, like Catherine Dérioz of the Galerie du Réverbère in Lyon, who still represents me today and with whom I work very closely. In retrospect, this experience allowed me to assume my role as an artist. Before, I had been a photojournalist. When I wrote the text for my monograph, I had to talk about my own experience shooting and my motivations. That really helped me position myself with respect to my work and the way I spoke about it with others.

LODLP : Can you tell us about your winning project? Has the prize had an influence on your subsequent work ?
R. H. : It’s a project called Tadjikistan Tissage (Weaving Tajikistan), which I was able to complete thanks to a grant from the Fondation Lagardère. At the time I was making films and documentaries about the missions of Doctors Without Borders, and with the grant, I was able to complete a personal work for the first time. Tajikistan is made up of several different ethnic groups that express themselves through weaving, which Stalin undermined by opening a factory that reproduced the fabric for $1 a piece. He believed that by flooding the market with cheap rugs, he could eliminate their traditions. Consequently, in Tajikistan, there are rugs everywhere you look. It’s a good way to decorate a home, and cheaper than paint. Visually, the rugs call to mind childhood memories of when I was living in a home full of rugs.

LODLP : Apart from the monograph, what impact did the prize have on your career? And what is your relationship like with HSBC today ?
R. H. : The prize was really important for me, because when I received it, I was thinking about going back to school to become a doctor. At the time I was working with Doctors Without Borders and I’d decided to stop photography and become a doctor. If I hadn’t won the prize, you’d be talking to a doctor today [laughs]. As far as my relationship with HSBC is concerned, Christine Raoult still sends me chocolates every year for Christmas. It’s a gesture that I appreciate deeply [laughs]. But seriously, we talk on the phone from time to time. We’ve really stayed in touch.

« It is too often that we only see Tajikistan for its heroin production and the civil war, which has caused fury since its independence 10 years ago. It is without doubt the smallest and poorest republic in Central Asia. The difficulty in access, the lack of security, the never-ending interracial conflicts make every movement difficult.
Rip Hopkins spent two months there and travelled 13,000 kilometres by foot, on horse and by car.
The images that he captured show people more than landscape. Without simple effect, without giving in to exoticism, composed despite the constant imminence of war, the images show everything, landscapes and interior views, in a light which brings out the colours that these people are fond of. It is a reserved approach, a sympathy that Rip Hopkins knew how to create, that allowed us to see a series of images which “speak” of a world that was unknown to us before. »
Robert Delpire – Artistic Advisor 2002