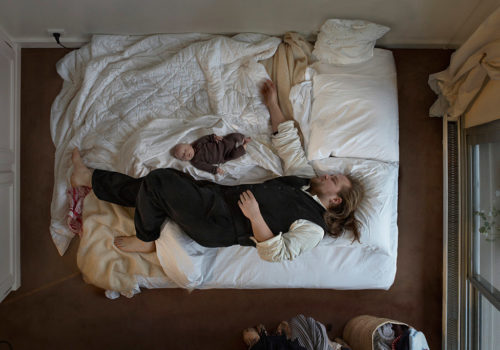 In 2010, the Prix HSBC pour la Photographie celebrated its 15th anniversary. For this edition of the prize, the art critic and curator Bernard Marcelis was named the artistic advisor to review the hundreds of submissions and select twelve of them. The three winners were all French: the duo Lucie & Simon and Laurent Hopp. Lucie & Simon were only just starting out when they were awarded the Prix HSBC. We spoke with them about their experience with the prize. Today we’re taking a look back at their award-winning series.

L’Œil de la Photographie : The Prix HSBC pour la Photographie turns 20 this year. It is awarded annually to two photographers to help them complete a project that will be exhibited and published as a monograph, often the artist’s first. What was your experience with the prize ?
Lucie & Simon : It was a wonderful experience. The prize gave us the opportunity the meet and collaborate with people  who were familiar with photography and all of its related fields. That year’s artistic advisor, Bernard Marcelis, helped us put together the monograph and exhibitions, as did the publisher Actes Sud, the members of the jury, Klauf Honnef (who wrote the text for the monograph), and the whole HSBC team throughout the year.

LODLP : Can you tell us about your winning project ? Has the prize had an influence on your subsequent work ?
L. & S. : In 2010, we had just finalized our project Scènes de vie, which began in 2006, featuring moments of  everyday life seen from above, which flattened the perspective and the depth of field, transforming the image into a surface. The prize brought new attention to our project and to our work in general. We had been lucky to receive coverage in the press, as well as awards like the Bourse du Talent and the Prix du Festival  de Vevey. The Prix HSBC further increased our visibility, and collectors consequently took greater interest.

LODLP : Apart from the monograph, what impact did the prize have on your career? And what is your relationship like with HSBC today ?
L. & S. : They really do support you over the course of the year. The different exhibitions across France are separated by a few months, which gave us enough time to prepare each one. HSBC aims to make each event special, so we could try out new things throughout the year. That gave us a certain freedom. We could treat each one like a new playground to experiment with.

“Lucie & Simon have been working together in Paris since 2005. They first attracted attention with their Earth Vision series of night views of urban environments shaped by artificial lighting. Their latest series, Scenes of life, looks at life from afar, or rather from far above. All the shots feature people in their familiar everyday surroundings, at a particular instant, a particular time of day: just relaxing, when no-one is around;enjoying a much-needed nap;or caught daydreaming. There’s often a sweet tinge of melancholy.
The other striking feature is that all the photos are taken from above. So the first impression you get is that the people seem to have been photographed unaware. And this sense of visual intrusion —voyeurism, almost—is intensified by the meticulous stage-setting, which belies the apparent abandon of the subjects, the spontaneous postures, the ordinariness of their everyday activities. It’s like walking into the wrong house by mistake .
The shift in perspective, the compressed depth of field, the flattened frontality, destabilise the eye and paradoxically prompt you to take a fresh look at everyday life, from a dizzying height. “
Bernard Marcelis, Artistic Advisor 2010