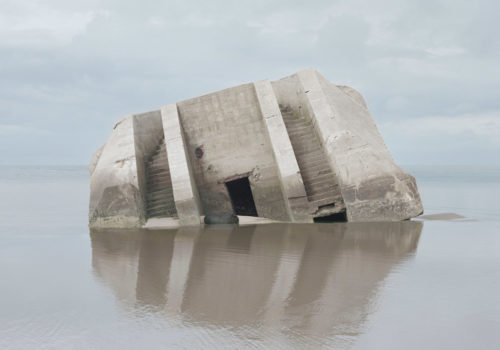 Our series on the Prix HSBC pour la Photographie has almost reached its end. This year, we’re showcasing the work of the two winners of the 2013 edition. Emmanuelle de l’Ecotais, art historian and head of the photography collection of the Musée d’Art Modernes de la Ville de Paris, was chosen as the artistic advisor. Two young French photographers, Cerise Doucède and Noémie Goudal, were named the winners. We spoke with Goudal, who splits her time between London and Paris, about her experience with the prize. Her work is currently on display at the FOAM in Amsterdam and the Venice Biennale. A solo exhibition of her work will be at the Photographer’s Gallery in London next fall.

L’Oeil de la Photographie : The Prix HSBC pour la Photographie turns 20 this year. It is awarded annually to two photographers to help them complete a project that will be exhibited and published as a monograph, often the artist’s first. What was your experience with the prize?
Noémie Goudal : Being involved with the prize represented two major personal interests for me, because I had moved to London when I was 18 and wanted to renew my ties to France. Winning the prize afforded me the stability to move back to France. There was also the professional interest, because I wanted to be introduced to people from the photo world in my home country, since I had few contacts there after living abroad for ten years. When I learned that I had won, it came as a major surprise, and I benefited immensely from this long-term project with its traveling exhibitions and the preparation of a book. The latter was especially important for me. I worked really hard on it. The former winners I know advised me to invest myself completely in this aspect of it and never hesitate to make suggestions. Having a degree in graphic design from Saint Martin’s in London, I really wanted to take the reins with the project. I worked on the design and layout with my choice of cover, on black paper with silver ink, and on the inside pages we put different paper to integrate different sketches, and included glasse for 3D viewing. It was the first time I worked on a monograph. I had done a few exhibitions, but these were the first ones in France.

LODLP : How did HSBC support you during this adventure? And what is your relationship like with them today.
N. G. : The project I submitted was a set of photographs I had shot in the past few years. There were mainly two series, Les amants and Haven her body was. In the end, in all of my work, it’s always the same underlying question: I’m interested in the relationship between the natural and the man-made. It’s hard to say what specific impact it had on my artistic life because it was such an eventful year. Winning the Prix HSBC has been a useful “calling card” in my career. If I have an idea for an exhibition, or am seeking permission to do something, having won the prize gives me more legitimacy and security in addition to the visibility. Since winning a prize, I feel like there’s a new dynamic in France and on a global scale. Right now I have a solo exhibition at FOAM in Amsterdam and the Venice Biennale as part of a group show. And in October I’ll be exhibiting my series Cinquième Corps at the Photographer’s Gallery in London.

LODLP : Comment HSBC vous a-t-elle accompagnée tout au long de cette aventure? et aujourd’hui, quels sont vos rapports ?
N. G. : The HSBC team was supportive all year long. We worked together closely on every level of my work. The year after the prize, I had a large show at The New Art Gallery Walsall in Birmingham. As soon as the prize came to an end, I had something else lined up. I was lucky. Today I keep in touch with Christine Raoult. Whenever I can, I make sure to attend any event related to the prize, and I do so gladly.

« Noémie Goudal builds installations in both open and closed locations, but in ones that always lack perspective. She uses industrial material (plastic, paper, cardboard, fabric) or photographs printed on kevels and hung in the environment. She transforms caves, disused factories, forests and endless seas, into strange theatre settings where anything can play out, even the most absurd of scenes. She creates fragmented windows that open onto an outdoors that appears fabricated and fragile, likely to disappear within the slightest puff of wind. All of these fictional places provide numerous levels of interpretation: man’s relationship with nature and the organic world, the fragility of each us, our impact upon one another, etc. The viewer is thus drawn to invest in these places and place themselves in a story (for example in Promenade, the lovers can escape the enclosed space of the barn and cross the bridge), each image offers a home to each of our imaginations. »
Emmanuelle de l’Ecotais, artistic advisor 2013