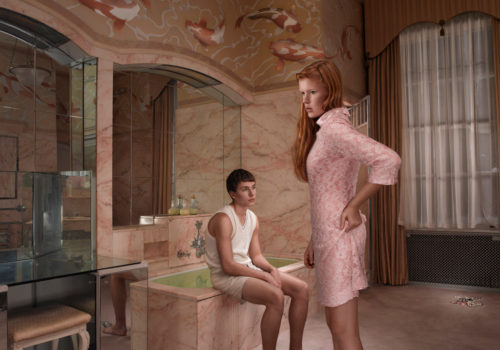 The artistic advisor for the Prix HSBC pour la Photographie 2007 was Alan Sayag, then curator at the Musée National d’art Moderne and head of photography at the Centre Pompidou. The two winning photographers for the 12th edition of the festival were Julia Fullerton-Batten and Matthew Pillsbury. Throughout this series, we’ve been interviewing formers winners to ask them about their experience with the prize and what they’ve been doing since. Today, the german photographer, Julia Fullerton-Batten answered our questions.

LODLP : Can you tell us about your winning project? Has the prize had an influence on your subsequent work ?
J. F. B. : My winning project, ‘Teenage Stories’, comprised 21 images. The images illustrated the early stages of the transition of an adolescent girl from puberty to womanhood.  This is a complex and sensitive age when teenage girls start seeing themselves in the context of society and question their identity. It marks a time of important physical, emotional and psychological change, one both of unease and expectation, in their minds especially one of unrestrained freedom. I chose to street cast girls as my models and placed them in a model village environment. I gave them minimal instruction how to pose. In this way, and as street-cast models they showed naturalness and awkwardness, that I was sure would heighten the authenticity of the images.
Putting the girls into the surreal settings stressed the significance of the act of day-dreaming frequently noticed in a teenager’s behaviour. For just a brief moment, they feel that they inhabit an imaginary world – one that is bigger, grander and more real than their own, mundane suburban surroundings. In their fantasy world, girls feel that they are much more powerful than in their everyday lives. I lit the scenes with a mixture of day- and artificial light, and subtle cross-lighting, making them unexpectedly ambiguous and cinematic.
The project was shot on a number of model village locations in different countries with locally street cast models. But as I shot each sequence of the project, I found myself increasingly relating the scenarios to episodes in my own adolescence. An element of the mischievousness seen in the images also stems from my own experience of growing up in a large family. Afterwards finishing the project, I was aware many years later in life, that I had re-captured my impressions of my own adolescence, and interpreted them using my camera from my, hopefully, now slightly more mature perspective.

LODLP : Apart from the monograph, what impact did the prize have on your career? And what is your relationship like with HSBC today ?
J. F. B. : I think it has been very obvious to me over the subsequent years, that winning the prize and publishing my first monograph propelled my career forward significantly. Winning any award is great news, but this extension to assistance in publishing a monograph was infinitely greater. Who knows if I had been able to achieve the success that I now have without the prize, or within the same time-scale. I am truly grateful to HSBC for the impetus that they have given me back in 2007.
Nowadays, I am a judge of international photographic competitions and give lectures to wide-ranging audiences. I always advise young photographers whom I meet on these occasions that they should enter as many competitions as possible, remarking especially to my experience in winning Prix HSBC pour la Photographie and the benefits that it gave to me.

« She intrigues the viewer with a narrative approach that is lightly sketched in but not developed. The colours are dull and muted except for an occasional splash, and the models have an ambiguous and tense attitude that creates an atmosphere of bizarre alienation, both visual and emotional. Her images combine the technical perfection of advertising photographs, whose seemingly immediate significance and evident composition contrast with a message that is, to say the least, ambiguous. »
Alain Sayag – Artistic Advisor 2007