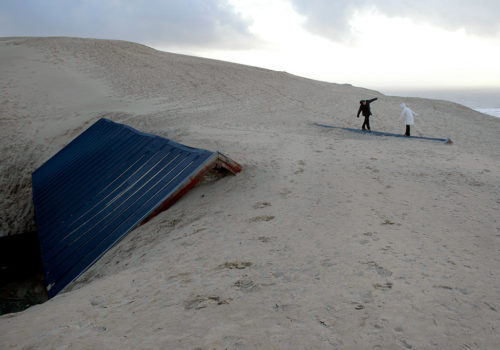 In 2005, the Prix de la Fondation CCF pour la photographie changed its name to the Prix HSBC pour la photographie. The two winners selected to inaugurate the new name were Birgitta Lund and Eric Baudelaire, and the artistic adviser was Oliva Maria Rubio, exhibition director of La Fabricà in Madrid. For the tenth consecutive week, halfway through our feature, we spoke with Danish photographer Birgitta Lund.

L’Œil de la Photographie : The Prix HSBC pour la Photographie turns 20 this year. It is awarded annually to two photographers to help them complete a project that will be exhibited and published as a monograph, often the artist’s first. What was your experience with the prize ?
Birgitta Lund : The HSBC Prize gave an instant and significant visibility to my work: Exhibitions around France, a monograph published by Actes Sud , launched during Les Rencontres d’Arles, a large exhibition at Phillips de Pury in New York, along with book signings in both France and the United States. On top, I had the pleasure of working closely with photographer and filmmaker Eric Baudelaire (who also won the prize in 2005), Oliva Maria Rubio (conseiller artistique 2005), Chantal Nedjib and Christine Raoult from Fondation HSBC pour la Photographie, and to publish the monograph with the very knowledgeable staff of Actes Sud.

LODLP : Can you tell us about your winning project? Has the prize had an influence on your subsequent work ?
B.L. : After living and working for 18 years in New York I returned to Denmark in 2003. The move quickly showed itself in my work and  the photographic project In Transit (2005) took form as a personal and geopolitical reflection on a changing world. On one hand, there is the personal journey of moving from the United States to Denmark; on the other, the evocations of the time frame in which the move occurred: 9/11, the war in Iraq and Afghanistan, the Madrid and London bombings, along with the forces of globalization and alienation all echo in a subtle manner throughout the work. Some photographs are very specific, others more metaphorical. In Transit can best be compared to a collection of visual poems.

LODLP : Apart from the monograph, what impact did the prize have on your career? And what is your relationship like with HSBC today ?
B.L. : Winning the HSBC Prize and the visibility that came with it meant invitations to exhibitions, commissions, acquisition of works and Julie Saul Gallery in New York began representing my work. The impact was extensive.

« Numerous levels of meaning and perception intertwine in the work of Birgitta Lund, both in subject and photographic method. On the one hand, there is the theme of her personal journey from the United States to Europe (Lund recently returned to Denmark after living in the USA for 18 years). On the other hand, there are evocations of the timeframe in which the move occurred, marked by the geopolitical events during these years. This series of photographs can be compared to a collection of poems. Birgitta Lund’s conceptual work comes out of the vision of an artist who uses photography to reflect a world in which we seem to be permanently in transit, a world where images flash onto our retinas for a few fleeting seconds before immediately being replaced by others. »
Oliva Maria Rubio – Artistic Advisor 2005