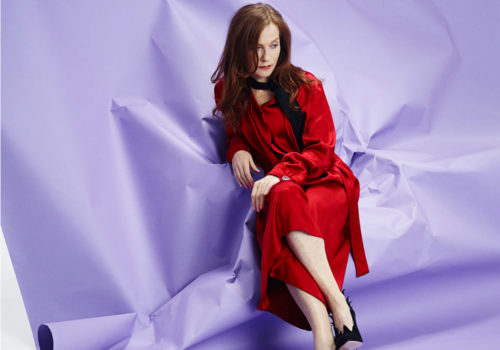 For the 14th edition of the Prix HSBC pour la Photographie, the photographers Grégoire Alexandre and Matthieu Gafsou were awarded the prize. In 2009, Olivier Saillard, head of exhibition programming at the Musée des Arts décoratifs in Paris, was named the artistic advisor. Today, we spoke with Grégoire Alexandre, the first French fashion photographer to win the Prix HSBC, about his experiences with the prize and what’s he’s been up to since.

L’Œil de la Photographie : The Prix HSBC pour la Photographie turns 20 this year. It is awarded annually to two photographers to help them complete a project that will be exhibited and published as a monograph, often the artist’s first. What was your experience with the prize ?
Grégoire Alexandre : It was a very rich and stimulating experience. The exhibitions and the monograph were opportunities to meet people and do research. And I’ve never forgotten the kindness and enthusiasm of Chantal Nedjib, Christine Raoult and the HSBC team.

LODLP : Can you tell us about your winning project ? Has the prize had an influence on your subsequent work ?
G. A. : The winning photographs weren’t a specific series but rather a selection from my work. I mostly work in a specific setting, where I develop a personal approach, mostly in the studio, staged and somewhat abstract. The prize didn’t really influence my work so much as the perception of my work outside of my usual audience, and raised its profile among among institutions, schools and other exhibition spaces.

LODLP : Apart from the monograph, what impact did the prize have on your career? And what is your relationship like with HSBC today ?
G. A. : The prize didn’t really have an impact on my professional career, which is always in an applied field, but it increased its visibility. I still follow the winners of the Prix HSBC with great interest.

« Grégoire Alexandre completed his studies at Ecole Nationale Supérieure de la Photographie in Arles and participated at the Festival for « Young Creators » in Hyères where he was exposed to a larger audience. Very recently he was selected by Couturier Christian Lacroix for the plan which he signed for the Rencontres d’Arles. Following the example of Paolo Roversi, Tim Walker or Peter Lindbergh, notably, the work of Grégoire Alexandre has been assembled and presented in the form of a monographic exhibition.
Grégoire Alexandre’s place in the world of fashion has been secured as much through the simplicity of the means he uses as through the simplicity of the shapes resulting from his photographs and their ordered, essential tones. The appearance of people or things is not deceptive in his work, but neither is it turned into cruelty. Quite the opposite, it becomes gentle make-up for the skin or the angles it softens. With discretion and without fuss, his delicate compositions often hanging by a thread, both literally and figuratively, have created a significant writing which then links with the vocabulary of photographic fashion of the 90s.
Still-life of clothes which are flipped through like the pages of a book, models buried beneath a pink cover, coloured laces tied to tree branches; each photograph by Grégoire Alexandre, distils the poetic sentiments of a decade which, when searched too hard for, are often ignored. »
Olivier Saillard – Artistic Advisor 2009