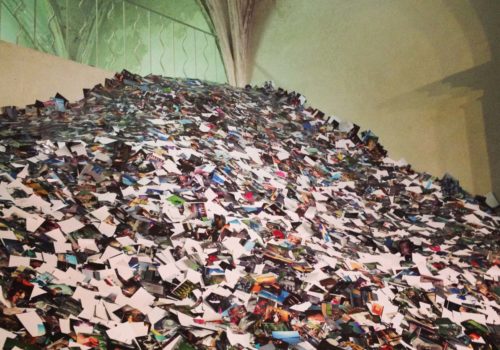 Arles Street Life
While the festival may be organised around debates, exhibitions and awards, another strand seems to coexist with these official events. For a few years now, Arles has been taking to the streets during the Rencontres in a sort of fringe of the fringe festival. The whole of the town is taken up with posters and exhibitions. Walls, porte cochères, fences and car parks are all fair game and the posters and painted frescoes have also taken up this year’s black and white standard. There was a time when the fringe trade was carried out more discreetly. Now it’s in evidence everywhere, on clothes lines, near the town hall and in fountains.

Anonymous
Anonymous photos seem to be making a comeback, especially family albums. Opposite the Archevêché, Erick Kessel’s Album Beauty pursues this trend. Kessel the curator has assembled family photos in many forms, reaffirming the place of amateurism in photography. A second Kessel exhibition, 24HRS in Photos, features 10×15 print-outs of all the photos uploaded onto the net in a 24-hour period. John Stezaker also puts anonymous photos to use in making collages and bringing out associations and juxtapositions which bear some resemblance to the photomontages of the 1910-20 period.

Colours
Picking up on the theme of techniques from the past, the studio portraits by Adib and Fouad Ghorab (Studio Fouad) and Van-Léo have been coloured by hand. The Raynal Pellicer collection also bears witness to the desire for re-appropriation. Retouching media images using ink, gouache and airbrush techniques, it raises the issue of manipulation of images. The re-adoption of old techniques was no doubt always going to come out in the theme chosen for this year’s festival but it would seem that we are now unable to envisage black and white without the corollary of colour. It is present everywhere, at the Guy Bourdin, in the polaroids of Hiroshi Sugimoto and the Wolfgang Tilmans large formats.

And more
No doubt carried along by the effervescence of Marseille 2013, Arles and the Rencontres are also showing the work of contemperary artists. The beautiful exhibition by Alfredo Jar at the Eglise des Frères Prêcheurs is electric. Of course he uses photography but there’s lots more. The text is written in negative, there are surges of light and the multitude of takes is impressive. Elsewhere Giussepe Penone is doing Arte Povera. When photography creates a common cause with wood, potatoes and bread this is what you get! Here however it’s all in black and white. Finally, the exhibitions at the Ateliers are, as is often the case, an invitation to experiment through installation. Big or small, black and white or colour, old methods or recent practices, the work at this year’s Rencontres was striking in its contrasts. The feel good factor certainly seems to have returned to the festival this year.