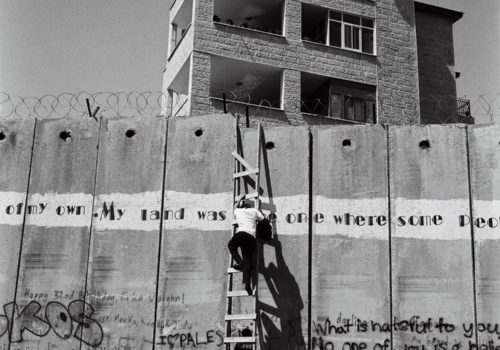 The book is presented like a wall extending over the pages, pages which aren’t turned but which are lined up and juxtaposed one on top of the other in a statement combining form and content. It was born out of commissions from six Palestinian photographers and one German, all of whom have previously looked at the subject of the wall in their work. The book offers both a physical and political vision of the structure. The German experiment had already shown that walls are no solution and Kai Wiedenhofer has been studying the Israeli wall since 2003. His mainly panoramic views show the omnipresence of this obstacle to peace and earned him the Prix Carmignac in 2010. The sheer weight of the wall and the way it condemns the horizon, compromising any possible imagination of a future, is also at the heart of Noel Jabbour’s work and, indirectly, central to the performance photography of Raeda Saadeh. Representing herself in situations where she’s fighting growing oppression against the backdrop of new restrictions that barricade her freedom as a Palestinian woman, Raeda Saadeh tells the story of the personal and political emotions that result from this paradigm. An echo of this psychological labyrinth is found in the physical one of Jerusalem presented and represented by Rula Halawani. Each intersection is barricaded, with access forbidden to the Palestinians, sucking life out of the old city encircled by an unbreachable wall that isolates it whilst claiming to protect it. Taysir Batjini‘s series was shot during the first months of the second Intifada and investigates the ephemeral nature of the wall as a chalkboard on which political slogans are posted before disappearing, posters wear away and graffiti fades. Raed Bawayah highlights a social and economic aspect of life with the wall, documenting the living conditions of Palestinian “illegals” who are condemned, for reasons of work, to live far from their homes, the other side of the wall, in spite of terrible conditions and the constant anxiety of imminent arrest. The more metaphorical work from Steve Sabella completes this selection of varied takes on this system of social, political, economic and religious exclusion.