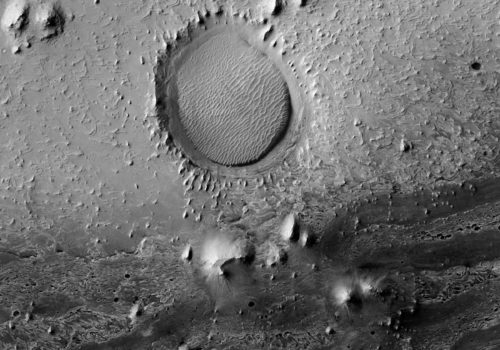 Valles Marineris, Olympus, Arcadia Planitia, Elysium Mons, Planum Boreum, Icaria Fossae and Noachis Terra are some of the Martian regions that NASA’s observation probe has flown over. The probe was sent into orbit in 2005 to study the planet’s surface. Among the tens of thousands of shots, with a resolution of unprecedented quality, Xavier Barral has extracted a series of nearly 200 photographs for a book. This series is presented this summer at the Rencontres d’Arles and at the Centre Pompidou-Metz.

Since the 1960s, many probes have brought back images of Mars. But in 2005, the MRO probe equipped with an Hirise camera and put into orbit reveals unsuspected landscapes developed over more than three billion years, captured in a resolution never attained before . As Francis Rocard points out in the book, “Along with Earth, Mars is the planet whose history is rich and diverse.” In order to best capture the geological and mineralogical contours of this mythical planet, it was decided to maintain a consistent point of view, with each photograph covering a 6-km wide strip.

This exploration allows us to discover familiar geological forms: craters, lava plains, sand dunes, canyons and polar regions. But these landscapes disrupt our usual points of reference: the dunes are made of black sand, the volcanoes sometimes reach an altitude of 22 000 meters, the canyons are 10 000 meters deep and the ice is sublimated. These images fuel our imagination, opening up multiple interpretations and thus inciting us to think about our world and ourselves. To help guide us on this photographic exploration sketched out by Xavier Barral and Sébastien Girard, texts by astrophysician Francis Rocard, professor of planetary science and director of HIRISE Alfred McEwen, detailed captions by planetologist and geophysician Nicolas Mangold, as well as a planisphere of Mars all provide keys for interpretation and place these enigmatic images back in their context.