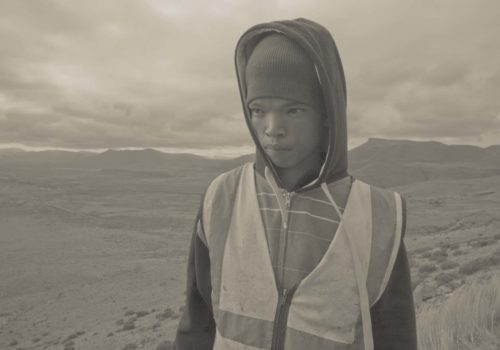 The 2012/2013 France-South Africa Seasons project was set up to engage a dialogue between two peoples. It brings together artists who did not necessarily know much about each others’ work : six South African and six French photographers who met and joined forces in an adventure which began in South Africa in 2012.
During these exchanges, some of which involved a certain initial questioning but which were carried forward with the the pleasure of discovery, twelve photographers turned their gaze on the country as it is today, the celebration of 20 years of democracy in 2014. They spoke with each other, shared their work and travelled through rural and semi-urban regions and the outskirts of big cities to (re)engage with the nation of South Africa.
Nothing was imposed, away from easily accepted ideas on what the photos should express. In the end, what we’re left with are perspectives of sublime landscapes carrying wounds, traces of the Land Act, a currently threatened or disconnected environment, a profoundly dynamic and mobile society existing beyond the sometimes extraordinary character of the South African natural world: Transition offers us a take that voluntarily lends itself to the mixing of codes to reveal a mystery. Warm thanks go to everyone at the Rencontres d’Arles and Market Photo Workshop, as well as to all the artists who initiated and participated in this adventure.

Bénédicte Alliot, Head of Division of the Seasons, Development and Partnerships, French Institute.

Transition is a collaborative photographic project carried out by French and South African photographers and focusing on the territory of South Africa. The project brings together works by six South African photographers (Santu Mofokeng, Pieter Hugo, Zanele Muholi, Cedric Nunn, Jo Ractliffe, Thabiso Sekgala) and six French photographers (Patrick Tourneboeuf, Alain Willaume, Raphaël Dallaporta, Harry Gruyaert [a Belgian living in France], Philippe Chancel, Thibaut Cuisset). They have developed separate photographic bodies of work that speak of a land experience unique to various sites in and around South Africa.
A commission as ambitious as this is exceptional in the history of photography. It has been made possible through the larger project of the 2012/2013 France-South Africa Seasons. Since the 19th century, France has had a tradition of commissioning works by talented photographers to interpret national territory in its relation to demography.
The photographs, produced during two journeys for most of the photographers, navigate between reality and imaginary worlds, the banal and the strange, lack and abundance.
The project’s ambition is to engage a dialogue capable of bringing out the complexity of the readings of places, land and a sense of belonging. It is a dialogue that has not always been easy. Many points of view and different positions have been expressed, along with divergences; many questions have remained without answers.
In South Africa, problems linked to the land are an integral part of racial history and Apartheid, the heritage of colonization, circumstances tied to ownership, and a sense of belonging and identity. These problems are the most obvious inheritance of an oppressed and inegalitarian society, whether in urban or rural contexts. For this reason, it is impossible to attempt a reading of the landscape without including a social approach.
The history of South African photography is profoundly rooted in the complexity of socio-political issues related to land and its ownership. 2013 is the centenary of the Land Act, which was the first founding law of Apartheid. The 1913 Land Act reserved most of South Africa’s land exclusively for white ownership.
This exhibition comes at a particular moment in South African history. Although the exhibition looks back at the past, it is also interested in change and the future. It is a reflection, but also an integral element of this landscape in transition, just as the post-Apartheid politics of South Africa also are.