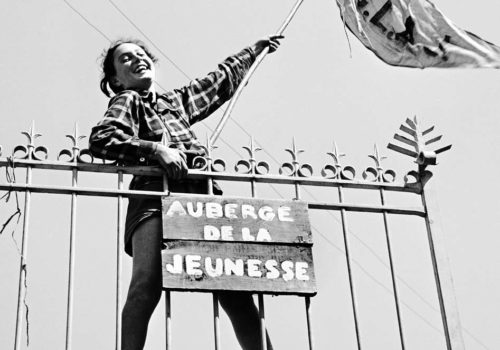 From childhood, Pierre Jamet had two passions: singing, which became his career after the Second World War, and photography, which was to remain a hobby throughout his life.
At the beginning of the Thirties, as a self-taught enthusiast, he learned photography from books and set up his first darkroom in his bathroom. Later, he was to build a bigger studio in the quartier Montparnasse, an area which also become one of his subjects of predilection.

In the decade before the war, although materially-speaking a difficult time, Pierre Jamet’s life was filled with many and varied activities: as a radio operator for the merchant marine, a dancer in Hans Weidt’s company, a singer in the A.E.A.R (Association of Revolutionary Artists and Writers) choir, head of a summer camp on Belle Île en Mer and, from 1937, an active participant in the Youth Hostels movement that grew so much in stature during the time of the Popular Front. He became more settled after the war when he joined the vocal quartet, ‘Les Quatre Barbus’.
Throughout his eclectic life, from one place to another, his lovers and his friends, often in the midst of some of the most significant political events of the twentieth century, Pierre Jamet gave himself free rein with the camera “capturing moments and extending the ephemeral”.
Warm and empathetic, respectful and restrained in the face of human suffering, he photographed the places he visited and the people whose paths he crossed. His portraits were his principal source of inspiration and his photos express a communicative joie de vivre as well as sometimes being veiled with poetic nostalgia.
While Pierre Jamet’s work thus incontestably puts him in the bracket of humanist photographers, it’s doubtless his ‘non-pro’ sense of freedom that gives it its distinctiveness and originality.

Pierre Jamet was a man full of modesty and humility when it came to his photographic production and during his life he never sought to publicise it beyond his circle of family and friends. In 2009, his daughter Corinne rediscovered the importance of his photographic archives and set about inventorying, cleaning, classifying and making selections from them to make them known to the wider world. Working from over 20,000 negatives, Corinne succeeded in distilling the essence of the work of this atypical artist, who is now receiving deserving national and international acclaim via a series of exhibitions in France and abroad.

Pierre Jamet was born in 1910 in Saint-Quentin. He died in 2000 in Belle-Île-en-Mer. Born to a modest family, Pierre Jamet had two passions throughout his life, singing and photography. In 1935, while managing a holiday camp at Belle-Île-en-Mer, he established himself as a professional photographer. He also sang in a choir and actively participated, within the Popular Front, in the youth hostel movement. In 1943 he began a singing career with the vocal quartet Les Quatre Barbus and spent the next twenty-five years singing throughout France and the world. Nevertheless, his passion for photography never waned, only becoming deeper as he documented his frequent journeys and the many encounters linked to his musical activities.