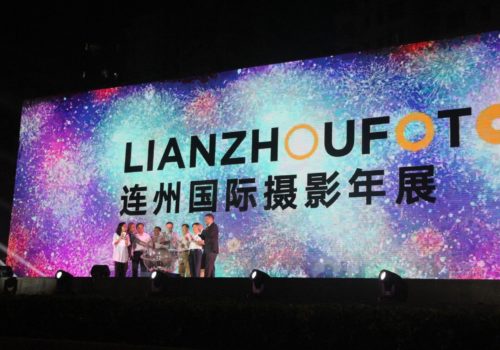 Twelve years in existence, Lianzhou Foto 2016 reasserts its union with photography and proudly assumes its fresh permanence. It’s always a pleasure to be there: the joys of discovery, the thrills of exchange—all the ingredients necessary for a successful get-together of this kind.

A heavily gilded banner announces this year’s theme: “As entertaining as possible.” Why gold? Shining gold appeals to a category of Chinese who have recently discovered the delights of consumption thanks to newly acquired wealth. In 2010, Lianzhou Foto posthumously invited Jean Baudrillard as its “main guest.” The theme that year was “Is the world real?”

The exploration of consumerism from the start has an experiential value. Baudrillard’s discourse, combining text and photos, met with great understanding. Six years later, his thoughts seem to hover over the festival, while the exhibited photographs aptly illustrate the philosopher’s theses that the “real world has disappeared, replaced by the signs of the real” and that “consumption has become a means of differentiation, not satisfaction.” The sudden acquisition of purchasing power over the course of mere thirty years by the middle, upper, and elite classes makes consumerism much more easily legible than in Western societies. But the result is the same. Let’s take a look…

Haro on consumerism… As Yuan Tianwen, the interiors photographer, demonstrates, real estate is a magnet for show-offs, in China as much as elsewhere. The more over-the-top, the more gold, more space, more exclusivity, more tinsel, the better, from Trump to Tiananmen fads.

In his eponymous series, photographer Shizhong focuses on the villas of Lingnan Water Town: residences huddled on either side of Pearl River, constructed by the newly rich from the Chenzhen zone, where all the rivalries and individualities come to the fore…

Li Zhengde, I hope, had a lot of fun: he followed the newly rich, middle-class types keen on being seen as “happy” wherever they go, and in particular in the context of their surprise parties, wearing strange disguises. They are very disengaged from the culture of the “seven deadly sins”! One can see them in any of the countless shopping malls in cities of over one to two million inhabitants. The malls are home to all the luxury brands, and in the parking lots, Porsches, Bentleys, Ferraris, and other fancy wheels take up space with undisguised glee … raising pollution levels nationwide.

Chen Canrong, on the other hand, is shocked by the lack of consideration hotel guests have for the cleaning crew… Human nature?

The festival sheds its gilded theme to present magnificent, tender-hearted series, such as Me and Me by the couple Chen Wen Jun and Jian Yanmei, who show an enviable capacity for powerful expression… The Taiwanese Tou Yiu-Fen photographs dogs about to be put to death: his companionship in their death is very touching. Shen Weng Lo, on the other hand, focuses on bears: he travels the world to see the effects of human stupidity, whatever its intentions, of transporting polar bears outside their natural habitat.

The transformations of the Chinese society are the topic of choice of Li Baijun, fascinated by them since 1979. An absolute must see is Arron Hsiao whose photographs of TGV travelers on board a speeding train surprise with their technical prowess.

There were many other photographers on view, both Chinese and foreign. To foreground the international character of the festival, suffice it to name some of the guest photographers: Marina Godonneix, Jean-Christian Bourcart, Sandro Miller, Sergei Chilikov, Debi Cornwall, Akiko Takizawa, Yusuke Morinato, Muki Hazegawa, Hiroshi Okamoto, Tim Parchikov, and Christian Lutz.

A feast for the eyes! Thanks go to Duan Yuting who has orchestrated this festival.

Michel Philippot is a French journalist based in Paris. He is former director of photography at VSD Magazine and Le Monde 2 Magazine.

Winners of the Lianzhou Foto 2015