Winners of the Lianzhou Foto 2015 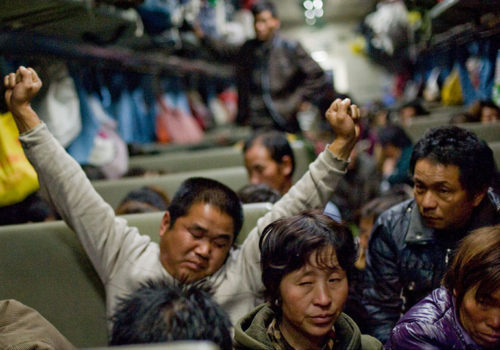 The Lanzhou Foto festival award, the Punctum Photography Award, was given to Qian Heifeng, for his series entitled “The Green Train”. The Judging Panel Special Award was given to the South African photographer Guy Tillim with his work “Avenue Patrice Lumumba”.

Photographer when his work as hotel employee allows him, Qian Heifeng  wanders on the “Green Train” a cheap and popular way of travelling.With 227 trips and 200000 kms , during 7 years on the Green Train he tells us about a part of China and about people he knows well.Nothing predisposed the electrician of a grand hotel born in 1968 in Wuxi an industrial city not far from Shangaï to make such a journey.But love of travel and a modest budget embarked him on board  the Green Train , he started taking pictures 2 years later, he was concerned to document the life of the poor people in the villages he went thru,to keep traces of the life in this airless, and heatless  humain space , hot in the summer, and freezing in winter, a way of life for peasants that come down from their villages to sell their goods, student on their way to study,business people of all kinds and couples on their way back from visiting far away family.A great part of the population use this mean of transport, that may soon disappear to be replaced by a fast train, quicker, but also more expensive.It is to defend this train and all the people using it that Qian Heifeng  keeps taking pictures.A work now acknowledge, that received many distinctions in China ,  exhibited for the first time as a story during the 11th edition of the Lanzhou Foto festival.

These photographs are not concentrated stories of post-colonial African states or a meditation on aspects of late-modernist-era colonial structures, but a walk through avenues of dreams. Patrice Lumumba’s dream, his nationalism, is discernible in the structures, if one reads certain clues, as is the death of his dream, in these de facto monuments. How strange that modernism, which eschewed monument and past for nature and future, should carry such memory so well.