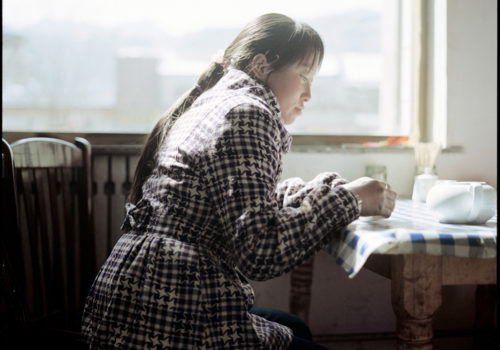 Yang Chen’s « Leave » present a shorter narrative structure. After the house is emptied, the imprints of former existence remain on blank walls ? The empty walls, absent of objects, form a space for semantic reversal, with these insipid traces articulating the infinite sadness of the vicissitudes of daily life.
The  exploration of the female body is limited to Sima Yuan « The Second Sex », wich is an allegory for the innerworld of Chinese women. In the piece entitled  « White night » ,  a young woman curls up her feeble form into  fetal position, while the dried leaves covering her body hint at death.
Xi Aiju’s »slow » is in contrast, an allegory for rural countryside idols. The forms of those unfinished clay idols- the corporeal structure formed by a tangle of branches and mud, exude an unspeakable sense of evil .
The industrial domination on Chinese cities presents an other type of narrative theme. Wu Di’ « Floating in the Dust, » offers a visual allegory directed at  sandstorms, smog, and environmental pollution.

I have made no attempt to reconstruct another reality, or to tell a literal story with a picture. My only intention is to seize my own pieces of this complex puzzle that is modern China. I have always been observing the relationship between my subjects and their surrounding environment, to distinguish what is changing and what is not.

In the course of wandering from one place to another, we witnessed the great changes that have been happening in this country. Traditional values and lifestyles that have been maintained for thousands of years are constantly being tested and challenged. We are all involved in the making of this deteriorating living environment, and hardly anyone is innocent.

Recent work “Auditoriums” of Shao Yinong and Mu Chen .
These spaces, formerly eminently political, are in disuse today.
programmed for  demolition or transformed into study halls, they lost their solemnity of yesterday.Tian Ye – Endless Questions

mingled with endless questions about ultimate meaning of the past and present.

When dusk falls, if you stand on a street in a city, you will be awed by the convergence and movement of the dense crowd of people coming home from work. Such a large number of people are being received, accommodated, and arranged by this space we call a city.

When bustling crowd subsides, you might think, “Where did all those people go?” You know that they are at home, but the problem is so many people have so many homes. What is each family like? What kind of house do they live in? What color are the lights in their rooms at night?

This work is the result of a seven year long visual study of the residential architecture built from the 1960s to the 1990s and the lifestyles of the people that reside in it. I made this series for a very simple reason; I have lived in this kind of place for more than twenty years.

The work focuses on nine different aspects, and I used nine rolls of film to record each aspect. In the end, I used a structure and concept similar to a documentary to directly narrate these aspects.

The transition period in Chinese contemporary residential history was not as easy as that of Chinese clothing. In the 1980s, that dull, monotonous grey attire was left behind. But nowadays, the buildings built in 1960s, 1970s, and 1980s still house a significant number of urban residents. Due to their economic and social positions and the fact that they live in this environment, the lifestyles of so many people living here is completely different from those that fashionable advertisements show us.

In the past, this kind of residential architecture was always funded and built by the government. The buildings are still widely used, and their features are very common. In materials, architectural structure, and exterior appearance, they are very similar, most especially in every northern Chinese city.

Every urban resident over the age of ten once lived or still lives in this kind of home. These buildings house 50% to 60% of the urban population, so it’s disappointing that the life and mood here have not been truly observed and described before. These buildings exude a fresh and lively energy, but in society’s pursuit of illusory fashions, these homes have become a fossil of Chinese public life and custom, not dead, but largely forgotten.

They are female soldiers, born after 1990 in the Network era when  society became increasingly open and diversified, and their growing up process synchronized with the rapid development of the society under reform and opening up policy.