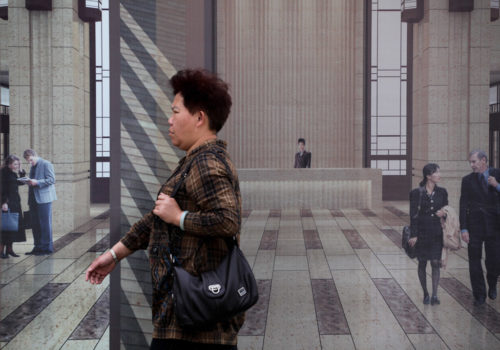 In the series of Landscape Wall, Ni Weihua had presented a stark social class divide in his images by contrasting sharply the the background of luxurious real estate advertissements in Shanghai or others cities in China, in costalcities in particular, and the workers at the bottom rung of the society living and working in Shanghai Officials around China.

Living on fiscal revenue from land consider the real estate developement of state-owned land under the control of the governement a most effective way to the economic growth, political legality,advancement and personal wealth. In this craze for real estate triggered by the officials, to invent catch phrases for advertisements, to create demand for touting real estate have been the priority of real estate developers and advertisers. Of course, those advertiments tend to be a pack of a cleverly designed lies. Pompous and misleading advertisements keep cripping up. To appeal to the passers-by , readers and audiences, great effort has to be made not only on fascinating advertising copywriting but also on images. The striking real estate advertisement, in particular, the billboards in the city streets, have become the material for Ni Weihua’s series of Landscape Wall.

Basically, Ni Weihua packs the billboard and the passers-by in a hurry into one image, wich, of course, need patience. He is selective about the passers-by in the image, who to have is revelant to the ideas he would like to illustrate in the series.

All the people in his series are passers-by they might be the construction workers. Therefore, occasionally workers in safety caps will be seen in his series. Nevertheless, the irrelevance between the two is most prominent. They are just construction workers. Never can they be the owners of the mansions. This is Ni Wuhua’s purpose, to emphasize stark social disparity and social class divide with the co-existence of mansions and construction workers. Cityzens and migrant workers are not on a equal footing with their background. i Such a sharp contraste between superiority and inferiority brings tension in this series, bringing the irreconcilable conflicts of reality into limelight.