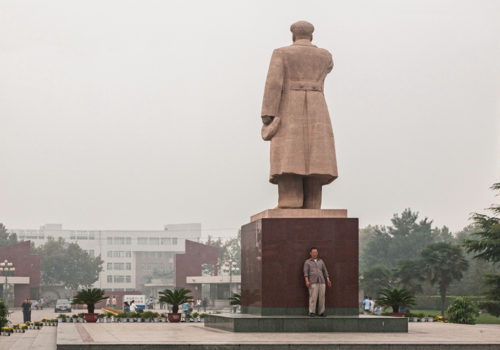 The theme of this year’s Lianzhou Fotofest is “Staging Encounters,” meaning the comparison and emerging of the creative energies of photographers. This project offers a portrait of Chinese society. The five following articles were taken from the festival catalogue. Read them closely, there’s much to be learned from the choice of words, their repetition (“allegory”) and the use of semantics.

By its very nature, photography oscillates in contradiction with human state of affairs. Attempts to examine « the nature of photographiy itself » result in endless frustration. In light of limitless technological developments, fine art photography seems to have been kidnapped by technology, but as a result, it possesses infinite possibilities for self-determination. However, this in no way hampers ourfundamental evaluation of photography. First,photographers take on the role of « the other » to observe, performing a technical reduction ( representation) of pictorial prototypes, thus forming stunning visualmemories. Second, photography is a subtle chess match between photographe rand technology, and therby truly serves as an important way for humandkind ( both in fought and feeling) to prove its dominance over machnery . Third, this chessmatch aims to delicately transform the structure of image prototypes in time and space, and imbue the image with some sort of artistic aura . No type of photography can transcend this philosophical boundery. With regard to the viewer’s psycological anticipation, photography should provide a combination of memory, technology, peculiarity, and beauty . there are the four key poetic elements of photography. Playingoff these key elements, outstanding photographers are able to strike a balance of visual expression, formulating an extraordinary visual language.
Making  mirror images of reality and memory is undoubtedly the main trend in contemporary photography. Wenng Naiqiang’ s memories of « Great History » records the  revelry in Tian’anmem Square, when the Gang of Four was overthrown in 1976, as well las images of everyday life and street scene in Guangzhou from 1987. These photographs present  two mutually resonant intersection in time- the end of the Mao era and rise of Deng Xiaoping’s «  Two Cats Era ». The faces of these celebrating people, when inlaid upon the dark framework of history, become an oft-cited philological visual resource.  Zhuang Hui’ s « Agency Fire » is the urban « mirror image » of a rural « negative ».

I throbbed of those moments which met with once dreams.

I feel I am a pessimist usually. The whole viewpoints from imagination are violent and fragile, and I reencounter these darker pieces again and again in the real when I thought they were just illusory dreams.

Between the years of 1994 and 2004, Chinese rock music has gone through a tumult of ups and downs. Despite its rapid rise from obscurity to enormous popularity particulary among the younger generation, the enthousiasm has gradualy waned and many have since disappeared from the public eyes. In the same period, the entire nation has also gone through accelerated changes both in social and economic aspects .

Gao Yuan has witnessed and documented various domestic and foreign journeys of  some of the most prominent Chinese rock star  As a photographer, she was able to record those moments as she saw them in a spontaneous and authentic fashion. Hue Yue – The peach garden

We are so arrogant, apt to become false gods at hypocritical moments. However, this is not a true part of ourselves, we can also find brilliance in those moments. This is the contradiction…

If this answer has no significance – if you only care about process – then who can tell us, what is the process? “Don’t turn around, you’ll turn into stone.”

I don’t know whether this is real photography or not. I do believe this is the other side of reality.
I can’t explain the exact meaning of these photos, as I still do not completely understand this world.
The only thing I can tell you is that I am full of doubt.
Often times I am just a questioner. Facing what is happening in front of me, I raise a question to answer another question.
The answer, in fact, is always a question mark.
Camera serves as a tool for my question, allowing me to raise my hands and ask questions any time.
Lights flash across, leaving profound images in the soul.
Outside the window, the white night is as bright as daytime, and people passing by in a hurry.
This is my world, white nights of the world