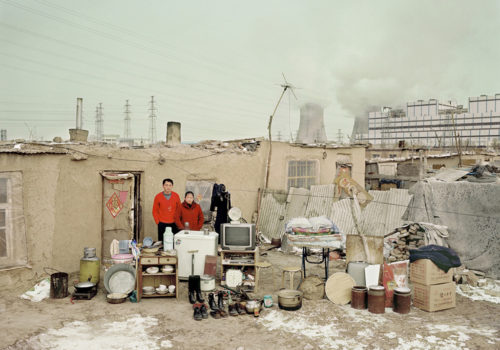 The theme for this year festival «  Staging Encounters » , ask a combination of the following important questions : where and when does this encounter occur ? Between whom ? What kind of encounter ? Why did this encounter occur ? Why does it need be staged ? This is a common journalistic line of questioning and yet it poses a difficult problems to the creators.
Undoubtedly, China is a peerless « Manor of Spectacle. » Since the dawn of the twenty-first century, power, capital, technology, and culture have joined  forces to shape numerous unprecedented, unimaginable occurrences or « miracles ». It provides visual experience, often refered to as « spectacles », that are a mix of astounding, absurd, surprising, and delightful characteristics ; the world ‘s most creative writers, artists, and photographers all sing its praises for its uniqueness, shock value, and intensity. More impotantly, as residents of a place where so many « miracles » and « spectacles » transpire, Chinese photographers have many opprtunities in which to « encounter » these spectacles, thus constituting the trinity of miracle, spectacle, and encounter.

Dr. Wang Chunchen is an internationally famous Beijing-based art critic and curator, he now works for CAFA Art Museum and also as Adjunct Curator of Broad Art Museum in the United States. In 2013 he was appointed as curator of Pavilion of China at the 55th Venice Biennale)
In August 23, 2013 Mr Wang Chunchen,wrote about the serie of Family Stuff by Huang Qingjun

The Chinese society accelerated its structural transformation since modernization was initiated . Under certain circumstances, this transformation can be very complete. Such a historical context provides art with great opportunities and challenges. It demands not only the befitted art form but also the artist’s response and observation in the face of the context change. The true life calls for a thoughtful art.

Grounded in such a transitional era, the photographic series Family Stuff by Huang Qingjun focus on family materials in our daily lives, aiming to reflect the human nature embedded in them. Thus, Family Stuff becomes a prospect within which the life condition of Chinese people is examined. Images from this series are at once pictorial texts that interpret  life in the Chinese society and a demonstration of the special value and function of the photography as art.

As an art form, photography does not passively record the reality. Rather, it demonstrates the artist willingness to join in the real world. The Family Staff perfectly shows such a special function of images. To complete this photographic series, Huang Qingjun visited a number of areas and regions in China, selecting the most typical residential images that are in tune with the current life condition in China. These photographs are reflecting the Chinese society,  showing various kinds of characteristics and meanings.

Facekini is very popular in the Chinese city of Qingdao, where it is mostly used by middle-aged and older women to protect themselves from tan inducing UV rays while in direct sunlight and from jellyfish while at the beach. As  older women are ashamed of exposing their saggy bodies on the beach, this contributes to another important reason for its popularity among the older generation

All power should be restricted.

In Power Space, Qu Yan shots a series of luxurious offices and shabby rural offices. It shows that the public power is being privatized. The problem of power is a very sharp and sensitive problem in China. Power is over expended because  nothing can restrict it. The power space in his work reflects deeply complex social contradictions.

All religion should be respected.

In Religion Space, Qu Yan hints at the situation of religious activities in rural areas .

All lives should be valued.

In Life Space, Qu Yan notices the complete failure of the health care reform in China, he is shocked by the rural medical condition and worried for people. The people in rural areas have a serious lack of medicine and medical staff because of the over market-oriented medical treatment. It shows the disregard for life of vulnerable groups .