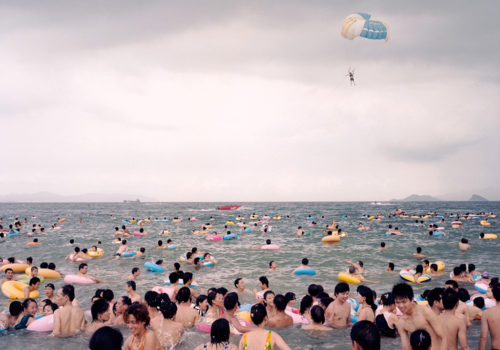 It is precisely the poetry of images that provides a rich semantic aura to various spectacles. Within the framework of poetry, imagery becomes important and its value is determined by its connection to its prototype. These prototypes include human imagery, material imagery( buildings, streets, roofs,bedrooms, walls, drawers, caskets, and cupboards), spatial imagery ( big, small, deep, flat, soft, solid, gloomy, and vibrant), and technical imagery( composition, focus, depth of field, light, tone, pixilation, sharpness, hue, grain, striation, and various other effects).
Photographers stand at the threshold of space and scan time ( past and present) from afar,seeking out the prototypes to witch we’ve grown accustomed, while simultaneous attempting to transcend their limits. This technically complex process of image creation forms a multi-sensory texture, incorporating object and portrait, light and shadow, substance and spirit, immediate experience and distant memory. A photographs an independent presence; it is separate from the photographer and takes on a free and unfettered life of its own, motionless in the drawer or on the wall, whispering profoundly to us.
On the one hand, it means seeking out the necessary poetic sentiment in everyday life; on the other hand, it means avoiding the grand narratives of the Xinhua news agency and the impressive aesthetics of salon photography. This is indeed a narrow space to navigate. Photographers are forced to travel through this space on the hunt for their own distinctive poetic sentiments. They come, in part, from the outside world, but originate primarily from memory and imagination. They cast a spiritual and knowing light, which  shines from two different directions, illuminating the soul within “the manor of spectacle”?
Zhu Lanqing’ s « A Journey in Reverse Direction, » attempts to use a pictorial method to resist the frenzied progress of urbanization. Republican-era women’s clothing that has been stored away in musty boxes, a coiled silver wire bracelet, the old-fashioned bun at the nape of Grandmother’s neck, and a dirt road in rural Fujian all draw infinitely close to our familiar concept of the image prototype . But here, they become tender road signs for a journey in reverse, wordlessly pointing to the dim passage of time and acting as a acting as a nostalgic womb of memory.
Yu Xiqi, «  Traveling in Mountains and Streams »  transforms the original mode of portrait photography, conversely seeking a new means of expression for landscape imagery. Sparkling ripples on the water’s surface, shimmering mist, the wavering headlight of a motorcycle on the road, and fog rising out of forest all forms a Half-light, half-dark image of the natural skin, texture, and tone of the landscape.
Li Zhiguo’ s « All Living Creatures » is a combination of animal ( fish hand insects) and plants ( flowers) remains,treated as specimens and digitally manipulated to form unusual black and white patterns that resemble woodcut prints. The deliberate placement, symmetry, and texture speak to the secret codes of life and death,steeped in mysterious radiance and deathly aesthetics.
He Yue’ s « Peach Blossom Spring » utilizes the mold forming on rotten fruit, as well as the name and the history behind the « Peach Blossom Spring »( aka paradise), to address the inverted poetry of everyday life. The mold even encourages us to dwell on the poetry of the mildew blossoms themselves.

He Yue’ s « Peach Blossom Spring » uses the mold formed on roten fruit, as well as the name and the history behind the « Peach Blossom Spring »( aka paradise), to address the inverted poetry of everyday life. The mold even encourages us to dwell on the poetry of the mildew blossoms themselves.
Wang Yuanlin’s Shibati (Eighteen stairs) – a typical slum in Chongqing, a model metropolis which is the youngest municipality andthe most populous city ” over 30 million”,and the fastest growing city in China. It used to be the central neighborhood of the city and is now replaced by the glamorous new downtown area only one block away.

The evolution of the region reflects the urbanization process now observed in every city around the country: Old town centers were replaced, abandoned, demolished, and eventually reborn from the ashes.

You Li – Latitude of Silence

This series of pictures were made  on several trips near the northern Chinese boarder between 2007 and 2009.

China has a long coastline from the mouth of the Yalu river in Liaoning province in the north to the mouth of the Beilun river in Guangxi province in the south.In  total eighteen thousands kilometers. There are great changes every day in China since it began opening up 30 years ago. The cities are like big construction sites speeding their construction pace to catch up with the rest of the world. All of this appears particularly outstanding in China’s coastal areas. A multitude of countrymen leave their native place to go there. Urbanization drive continually accelerate growth while people’s spiritual life stay.

In China, every year hundreds of millions of people find work in other places. During the Spring Festival, hundreds of millions of people return home during a very short time, so the whole family can be reunited. They come from everywhere, from North to South, East to West. People often lose their way during this process, losing the feeling of a real home. Lacking a sense of belonging, perhaps this is the symptom of being Chinese at this time for many people.

I started this photographic project  after reading the novel River of the North written by Zhang Chengzhi。Attracted by the powerful words of this novel, I decided to take a walk along the Yellow River. FESTIVAL