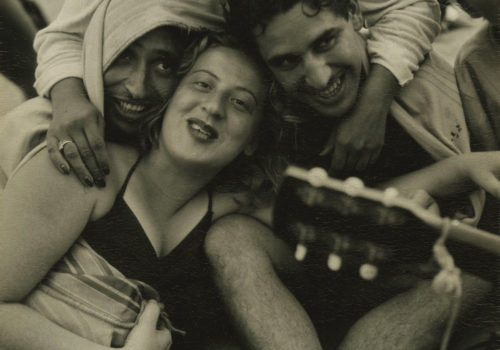 Almost ten years ago in 2007 Howard Greenberg published An American Gallery to celebrate his 25th year in photography. In it he showed 25 photographs drawn from his collection. Howard is a tremendous gallery owner and and a really nice person! This book is a marvel and Howard’s comments, which accompany the pictures, reveal his great passion for photography. Every two weeks for the next year we will serialise the book. Today, this is Coney Island, couple embracing, (c 1947) by Sid Grossman.

« This picture speaks to me in many ways. To begin with, I grew up in Brooklyn. I’ve often thought that this photograph might have been taken the very day I was born. If possible, and I like the idea anyway because this was the Coney Island I experienced as a kid.
But it’s much more than that. Sid Grossman was one of the founders of the Photo League, a group whose credo was: we care about the world being a better place for people and we ‘re going to use our photography to help change the world.” They were the sons and daughters of immigrants, New York was their backyard, and their subject the common person, the everyman, of the Lower East Side, of Harlem, of Coney Island.
Grossman in many ways embodied what the Photo League was all about; and, he was the teacher of the League. He ran the darkroom, he taught workshops, he was a forceful presence who influenced an enormous number of photographers, not only at the League, but beyond that. I met quite a few of the people who were Sid’s students and over and over they all said the same thing, …. Sid Grossman was a tough son of a bitch, and he was the best teacher of photography who ever lived. That was the story of Sid Grossman. He was an opinionated, difficult, demonstrative human being with great conviction in his ideas about photography, and they were right on.
In his own work, Grossman was pushing the medium from the pure documentary photography that was done at the League before World War II to more personal expression, to a more explorative kind of photography that asked about the medium itself and what you could do with it.
And this picture encompasses all of that. It’s the first great Sid Grossman photograph that I knew about and it has so many of the elements that are important about his style of photography and about things that I like in photographs the tight cropping, the way a face and arms and legs come at you from all different parts of the edges of the frame. Sid really explored that as a motif of picture making, beautifully and effortlessly. It was his way of making a picture more dynamic.
And of course, being deeply humanist as well, it “s very much about these three people having the time of their lives. It’s a joyous image- that sense of post–war optimism and inner glee, having the best of what goes on amongst human beings. It’s all in his picture. »
– Howard Greenberg