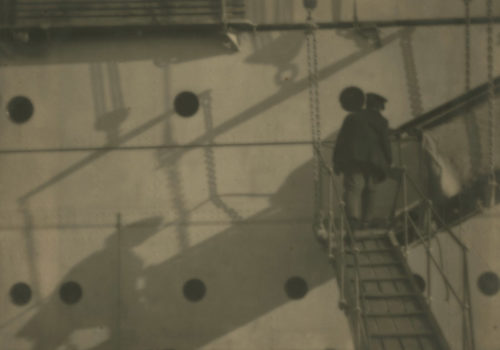 Almost ten years ago in 2007 Howard Greenberg published An American Gallery to celebrate his 25th year in photography. In it he showed 25 photographs drawn from his collection. Howard is a tremendous gallery owner and and a really nice person! This book is a marvel and Howard’s comments, which accompany the pictures, reveal his great passion for photography. Every two weeks for the next year we will serialise the book. Today, this is Fantasia De Luz (c.1930) by Enrique Aznar.

Almost ten years ago, in collaboration with Michael Torosian of Lumiere Press, I created a publication to mark the 25th year of my gallery.  At risk of offending several photographers whom I represented and had both loyalty and affection for, I went into my personal collection of photographs for inspiration.  I selected twenty-five (of course) photographs whose content and “story” about how they came to be a part of my collection, might resonate with those who cared to read about them.  With one small page for each image, I attempted to explain why they were important to me.  In the end it’s possible that the book became a primer to the idea of bringing ones unique life experience to the obsessive behavior of collecting.  And having been a serious photographer, as well as a gallerist with access to so many treasures from our history, perhaps my perspective and stories were interesting. Howard Greenberg

Enrique Aznar
It”s a tangled path to the source of this mysterious picture and it leads back to a private dealer from the Czech Republic who was based in Paris and had a particular passion for Hungarian photography.
His name was Csaba Morocz and he was a great detective. Though he dealt with a variety of art forms he had a special appreciation for photography. On trips to Hungary he researched and discovered great material from between the wars; he was always finding good stuff.
American friends of his were planning to participate in a show in New York and Csaba asked them to exhibit a collection of Hungarian photographs which he had amassed. I was tipped off that there were works by André Kertesz and Martin Munkacsi and when I got there I was blown away, not only by the Kertesz and Munkacsi prints, but by a goldmine of pictures by Karoly Escher, Angelo, Jozsef Pecsi, Imre Kinszki and an array of extraordinary photographers who never left Hungary and never became known in the West. Because of that show I was introduced to Csaba and came to appreciate his knowledge and his eye.
A couple of years later Csaba had a booth at Paris Photo. By then most of the good Hungarian work was gone, so I was curious to see what he had come up with. His new find was early Spanish photography. Csaba had become a known quantity in the field, and there were a lot of people trying to buy up the best things right away. I scanned the booth. It was filled with incredible pictures, but this one stood out for me. I thought to myself. “This is it, the moment of photography that I love so much, the emergence of Modernism with pictorial renderings.” It had all the key elements characteristic of that period.
The graphic construction is striking. A single human form is engulfed by the pattern of light and shadow on a plane punctuated by the dark circles of the portholes. It~s a geometry of mystery with a man walking into the side of a boat while his shadow takes on an animalistic form ascending towards him.
It’s a riddle of disparate components which come together and are solidified by the beauty of the printmaking.
This is a photograph that I look at every day, and I never grow tired of it.
I knew nothing about the photographer at the time I bought the print, nor do I know anything about him now.

Vivian Maier, In her own hands at Howard Greenberg Gallery