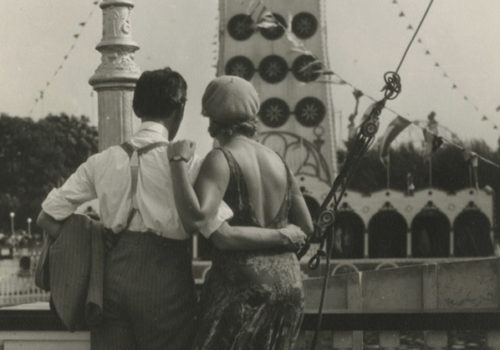 Almost ten years ago in 2007 Howard Greenberg published An American Gallery to celebrate his 25th year in photography. In it he showed 25 photographs drawn from his collection. Howard is a tremendous gallery owner and and a really nice person! This book is a marvel and Howard’s comments, which accompany the pictures, reveal his great passion for photography. Every two weeks for the next year we will serialise the book. Today, this is Couple at Coney Island (1928) by Walker Evans.

« Throughout his life, Walker Evans was most interested in the structural elements of the photograph, human qualities often played second fiddle, but this picture possesses a particular sensitivity and I like that. Evans is focused on these lovers, the way they ,re standing, the ease of their relationship, the comfort of their touch, their simple pleasure at being in Luna Park.
Yet, where another photographer might have moved in and isolated the figures, making them the thrust of the photograph, Evans saw the potential of other elements. The poles and the rigging, the pillars and the ride, all the detailing at the top of the picture is as important as the people below. Ingeniously, he moved the camera to place the couple asymmetrically, arranging the other components into a complex, yet well-balanced picture. Evans saw that way, explored space that way, and did it as well as anybody who has ever photographed.
I love his work because I tended to see and think in a similar way in my own photography. In the beginning I wasn’t aware of Evans, or anybody else for that matter, but as I progressed I came to realize that I would often structure my pictures, naively so, in the same way he had.
I gravitated towards wider angle lenses so I could see the space around my subject. rd look and wait for the moment when the elements came together to create a picture that was more than the human object. The environment was important to me, how to organize it in an effort to make photographic sense of it.
Frankly, most of the great photographers see that way, and each has his own style. Ifs a way of seeing that is very natural, and very photographic, but nobody corralled it like Evans. He was more succinct.
Evans was, and continues to be, enormously influential. His 1938 Museum of Modern Art exhibition, American Photographs, was seen by more photographers
than probably any other photography show of its day. I think it instructed the next generation. In fact, I know it did because I spoke to the photographers of the Photo League and the New York School. I heard it over and over, “”Evans was the Number One Guy., He was elevated to the status of a God. In the trinity of influence they all told me it was Lewis Hine for his social conscience, Paul Strand for his human dignity, and Walker Evans for his picture making. »
– Howard Greenberg