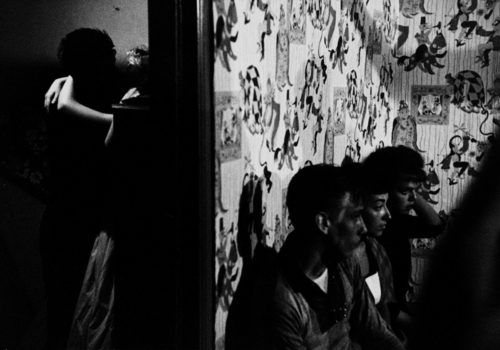 Almost ten years ago in 2007 Howard Greenberg published An American Gallery to celebrate his 25th year in photography. In it he showed 25 photographs drawn from his collection. Howard is a tremendous gallery owner and and a really nice person! This book is a marvel and Howard’s comments, which accompany the pictures, reveal his great passion for photography. Every two weeks for the next year we will serialise the book. Today, this is Brooklyn Gang, Couple Kissing in the Corner (1959) by Bruce Davidson.

« Bruce’s greatest talents are his patience and tenacity, and the understanding that the best documentary photography requires an extended period of time with the subject. That was always his MO. In the mid .. fifties he did a wonderful in, depth essay, about the widow of an impressionist painter, that he titled ‘The Woman of Montmartre. Bruce befriended her and she allowed him to photograph her in her home. He showed that essay to Henri Cartier Bresson and as a result was invited to join Magnum. A couple of years later, he did the Brooklyn Gang, a landmark work which still resonates in the photography world to today.
I knew the Brooklyn Gang pictures, but for some reason I was not familiar with this one. But when I came across a print I immediately wanted it, for several reasons.
First of all, it was a beautiful print, the kind that I like the most, with the smoky grays that give you the feel of the papers from the fifties with all those subtle tonalities in the lower values. And I admired how Bruce had divided the picture into two separate spaces, physical and emotional, giving it an added dimension.
But I also related to it. I grew up in Sheepshead Bay in Brooklyn and I remember the parties in the basements of friends” houses when we were teenagers. We”d gather to listen to music and sit around trying to figure out how we could dance or somehow touch a girl we liked. And then the ultimate expression of desire would be to go so far as to kiss her.
This couple had stolen away and was making out, they carved out a little private world for themselves. The other kids were hanging out in a different world, talking and playing records, but what we know is they’d rather be on the other side of the wall.
Bruce spent months roaming around with these kids. A lot of this was shot at Coney Island and most of the kids were from around Prospect Park. Bruce was not a gang member and he was from Chicago to boot, but somehow he was able to become part of them and they allowed him into their world.
This picture brings me right back to my days in Brooklyn. The look of the kids, even the wallpaper, everything about it is enormously nostalgic for me.
I showed the print to Bruce and he was very happy for me to have it. »

The Getty Research Institute : At the Crossroads : Qandahar in Images and Empires