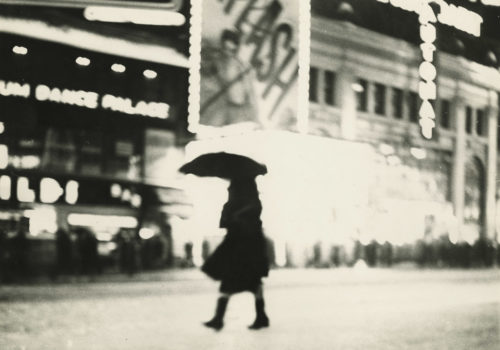 Almost ten years ago in 2007 Howard Greenberg published An American Gallery to celebrate his 25th year in photography. In it he showed 25 photographs drawn from his collection. Howard is a tremendous gallery owner and and a really nice person! This book is a marvel and Howard’s comments, which accompany the pictures, reveal his great passion for photography. Every two weeks for the next year we will serialise the book. Today, this is Whiplash (c.1947) by Ted Croner.

« Ted Croner was a photographer who had a moment of incredible brilliance. After serving in World War I I, he returned to New York and enrolled in Alexey Brodovitch’s famed Design Laboratory at the New School for Social Research. Ted was one of the early students and he really understood and thoroughly swallowed Brodovitch’s legendary challenge, « Astonish me! », Ted became a master of backlight. In his photographs it spills from some unworldly energy source, enmeshing, enveloping and dissolving everything in its path. Brodovich pushed Ted to reach for something different and encouraged him when he saw the results. For a good eight years Ted made the most fantastic, radical street photographs.
And Times Square was the epicenter. There was enough light to photograph at night without a flash and it opened up a whole new realm of possibilities. There was a certain crew who really went to town with this sort of thing, and Ted was at the head of the pack.
Among his many accomplishments, in 1949, Ted was part of a show at the Museum of Modern Art along with Harry Callahan, Lisette Model and Bill Brandt. He was that good.
I had the privilege to be the first and only dealer who ever worked with Ted. He stayed out of the gallery scene for a long, long time- by choice. Fortunately, through Jane Livingston and her book The New York School, we became close friends. And this photograph, which I bought from Ted, was one of those pictures that defined, yet again for me, what a photographer with a certain idea, a vision, could achieve.
Silhouetting a figure against light is not a particularly new idea, but this photograph could only have been made by Ted. And there are thousands of photographs that have been created with the interplay of a person juxtaposed against some signage in the landscape sometimes obnoxiously prevalent but Ted subdued it. It adds to the image but is not a comment.
His photographs are about light. Within this aura the figure is no longer earthbound. She’s been picked up in all this whiteness. It is an image of raw, unadulterated energy. The energy of light defining itself, giving meaning to the very atmosphere. »
– Howard Greenberg