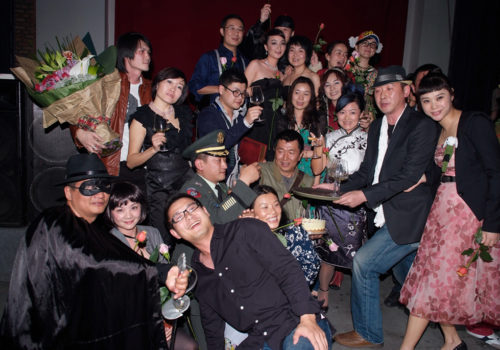 In comparaison to grand historical narratives and group representations of « the people », individual portraiture sometimes constitutes a greater visual « pressure », due to its ability to draw even closer and present the face with greater clarity. This is the continuation of traditional portrait composition as expressed in contemporary photography.
In  Jhin R. Oh’ « Laugh », the model’s body is hidden by a black or white curtain, while only the  head ( face) and hands are exposed and brightly lit in the foreground. The performance is carried out by partially-exposed body parts.
Lee Seung Hoon’s « surgery » revises the definition of « portraiture ». South Korea is the epicenter of plastic surgery for women, and the self-beautification movement has surged across East Asia and ultimately spread around the world. The phenomenon of facial reconstruction means that everyone who gets plastic surgery is essentially another kind of « photographer »,without need  for camera equipment. Their mission is to transcend the boundaries of photography, from the perspective of the photographic subject, directly transforming the intrinsic quality of »portraiture », so that it presents a more pleasing appearance to the eye and the mind.

Shenzhen, once a fishing village, has turned out to be one of the biggest cities in China. As the experimental ground for China’s reformation, Shenzhen is always the frontier of new cultures and new practices, as well as the most important city in the urbanization history of modern China. People from different parts of China have gathered in this new city and started their own adventure. In order to pursue their “Shenzhen dream”, they moved to Shenzhen from other cities, small towns and rural areas. The migrants are all in a new environment and experiencing brand new lives. No matter whether they are aware or not, they were involved in the urbanization process, while the city is growing rapidly.

China is changing rapidly and so are Chinese citizens. In the process of urbanization, how do Chinese citizens keep up with the trends? In these events and parties, I found my way of answering this question. It may take as long as twenty years to reveal the answer but I’m determined to use my camera and record the faces of Chinese citizens in this ever-changing era – Faces that may well represent the image of this nation in the future.

We laugh in our lives in seven emotions;
joy, wrath, sorrow, pleasure, love, hatred and greed.
Face, in a naked place, as if it speaks on behalf of life,
waiving and withstanding, wrinkled concaved feature flutters.
In cold and strong wind, it keeps crying, its nose keeps running,
and it keeps perspiring. It keeps breathing.

Gazing at your face with my head up,
I come face-to-face with myself.
Your face and my face overlap each other’s,
as my face comes across your hands.
Possession free of any other;
Youth for youth, aging for aging, it hides its trace
and ends up showing itself once again.
Eyes are incapable of hiding their truth in the end.
Once again, the life’s mortal laughter.
A person in a laughter
Laugh that may or may not exist,
laugh at none-existence of the present,
sarcastic laugh towards the world,
laughter at mortality’s end,
watching a breathless laughter at a ceased time.
The world’s uncountable laughter,
freed laughter from above reasons,
from which and what
and free from all possessions.
Where laughter of the two, you and I,
seems vague of encountering, unleashing the weight,
beginning from the end’s start,
whether the laughter is from freedom at its truth.

People in laughter.
Facing squinting light of an intense sun,
facing the unknown of a fuzzy darkness,
facing a hollow space and various sized contours at its beyond,
constantly roaming for life’s purpose,
making laughter with chasing the unknown.
Fragments of this laughter; undetermined encountering with a stranger
eye to eye, greeting, farewell, relationship, encouragement,
trading big laughter, breathless whispers.
Bringing forth laughter as the above,
the everlasting moment.

The identity and cause of laughter
at its unimportance.
Laugh for laugh,
eternity at its moment.

Everything started with taking pictures of my home. I gradually discovered how it feels so familiar and unfamiliar at the same time. I do not know the many reasons that were behind my parents’ move to this city, but it must have been the result of a series of decisions one after another.

I attempted to look for clues from my conversations with them, old photographs that are kept and books, as well as from our home and their living environment, eventually extending to places that they still often think about. Perhaps I am only doing this out of the desire to be closer to them.

In a capitalistic society, a body itself as well as its physical activities and psychical ideas are given the same status of a private property and managed as “assets”.

As a symbol which indicates social status, an attractive appearance in modern consumer society is useful and valuable. In such structure, ‘beautiful looks’ are being enhanced and consumed through plastic surgery.

Compared with  aeroplanes, birds are tiny.
It is said mankind invented planes based on the inspiration borrowed from bird flights. Yet I see planes shutting across the sky, flushing all birds away.
Compared with dining tables, birds are tiny.
birds are friends with  humans. Yet I see birds delicacie on the table, bare-handed tearing being the only etiquette since the cutlery is too slow.
Compared with the home town, birds are tiny.
It is said migration is the instinct of birds. Yet I see icing apples and the moon in the cold night, and the birds with ruffled feathers too fragile to fly back.
In Li Zhiguo’s photos are a number of birds and insects.
He designed and made his own a 20×24 super large format camera and took super-macro shots. The practice involved a series of technical difficulties such as lens coverage, exposure compensation, depth of field controlling, focus accuracy, optimum resolution. Beside, each picture had to undergo multiple exposure from 2-3 times up to 20-30 times. I can hardly imagine how the artist overcame these difficulties,

It will be unique whatever any image is captured as a picture.