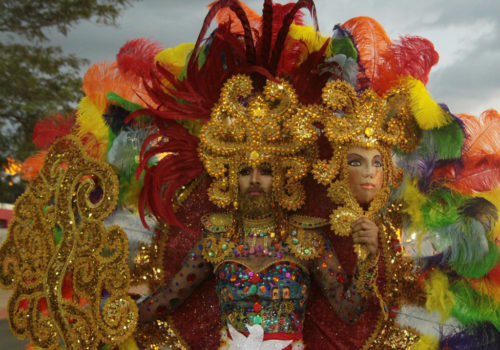 The Ortiz Gurdian Foundation has stood up for politically and socially committed art in Nicaragua since it was founded in 1996. When the foundation first held the the Biennale of Nicaraguan Visual Arts (BAVNIC) in 1997 to promote local artists, the work was mostly painting. But in the past few years the BAVNIC has featured a large majority of photographers, videos, installations and performances and acquired many of the exhibited artwork to enrich the Foundation’s collection.

Photography has become the means of expression of performance, and video has borrowed from documentary and surrealism to address history. Ernesto Salmeron, Alejandro Flores, Luis Morales Alonso and Cristina Cuadra offer interesting examples of the deconstruction and reconstruction of the visual memory of Nicaragua through art. Each in their own way, the artists combined disciplines, influences and archives, positioning themselves in reaction to the populist iconography produced by the FSLN (Sandinista National Liberation Front) during the Revolution and since maintained by the party of President Daniel Ortega.

A painting by Alicia Zamora on display at the Foundation in Léon is inspired by a famous photograph by Susan Meiselas, “Molotov Man,” of a Sandinista throwing a molotov cocktail. The photograph made him into a hero – the image appeared on t-shirts and posters printed at the occasion of the 25th anniversary of the Revolution. The Galerie Lelong in New York is currently exhibiting the photograph as part of the group exhibition Re-Framing History, the title of which resonates with that of BAVNIC IX: Reciclando la Memoria, Retomando la Ciudad (Recycling Memory, Retaking the City)

By organizing the program around such a precise and complex subject, the curators of the Biennale, Juanita Bermudez and Omar López-Chahoud, reject any restrictive and stereotypical interpretation of Nicaraguan art. The concerns of the country’s artists are as varied as the social and political realities of Nicaragua are complex, and they invite the local and international public to take part in an interesting conversation.

In fact, Nicaragua and the rest of Central America have aroused the interest of the market, with the Biennale in Cuenca, Ecuador, opening at the end of the month, and the Guatemala Biennale in July.

The latter will be the official Biennial of Central American art, and will host six artists featured at BAVNIC these days. This is also in Guatemala that will take place the Foundry Workshop in 2014 and we will soon feature in these pages workshops and residences places that will open in Nicaragua next Fall. No doubt, they will interest photographers.

Until then, local public institutions and mulitplying international interactions. The BAVNIC includes 16 international artists, including Andrea Galvani, who has produced three videos for the occasion, and Yeni Studi , which presents Whiskey Papa. In this video, Yeni Mao documents the destruction by fire of a ship , and explains: “The piece questions the relationship between historical events : the establishment of Batavia , Indonesia ( now Jakarta ) by the VOC as the Dutch Colonial center of Asia , and the Bijlmerramp , the 1992 plane crash into the Bijlmer suburb of Amsterdam. The flight of the carried load an undercover chemical weapon ingredients , Bought by Israel from the United states. “

Firstly prohibited by local authorities, Fredman Barahona’s performance ended under police escort. Fredman was walking in the streets of Managua dressed in an extravagant costume designed by a beauty contest designer: a bright dress full of rhinestones and pearls and colored with the colors of the different political parties in the history of Nicaragua. This theoretical piece is certainly iconoclastic. It also provides a counterpoint to the artistic and political extravagances of Rosario Murillo who, be it reminded, is the first lady, spokesman and cabinet minister of Nicaragua, the president of the Sandinista Association cultural workers and the coordinator of the Council of Communication and Citizenship.

Murillo is famous for the twelve rings she wears at each hand and for the sculptures of frilly yellow trees that she “plants” around public space at the speed of an invasive plant. They embody a questionable presidential omnipresence that is also central to artist Marcos Agudelo’s sculpture, “El resplandor Sandino como pancarta publicitaria has sunk Sagrada la patria, a los sin héroes tomb of Nicaragua. Artista Marcos Agudelo.” (The Sandino glow as advertising banner of a sunk sacred country, the tomb of heroes no Nicaragua). The sculpture is a silhouette of Augusto César Sandino with his hat, as on most statues of him spread all over public space. In this representation though, Sandino appeared covered with colorful light bulbs and lying horizontally – overturned, just as the Statue of Somoza during the Revolution of 1979, and as the fake statue of Somoza that Alejandro de la Guerra (Flores) reproduced before pulling it down its pedestal again with the help of the Biennale’s public.