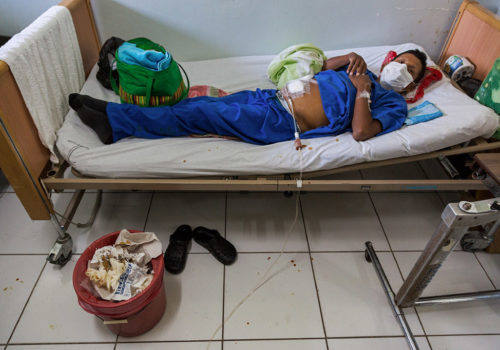 “Last June 15th, Daniel Ortega, the President of Nicaragua, held a ceremony in Managua to announce his newest and most audacious plan to help the country’s poor: a transoceanic canal, stretching from the Atlantic Coast to the Pacific, a few hundred miles north of the Panama Canal. ‘This is a project,’ he promised, ‘that will bring well-being, prosperity, and happiness to the Nicaraguan people.’ […] A former Marxist, he presides over an economy in which nearly anything goes,” writes Jon Lee Anderson in a recent article in The New Yorker.

And health goes too, in fact. In the north of the country, between Léon and Chinandega, a community of sugarcane cutters was largely wiped out by a “mysterious” kidney disease known as CKDu (Chronic Kidney Disease of unknown cause) affecting nearly 70% of the men working in the field. But it’s hardly a mystery: the cutters work 12 hours a day in scorching heat without breaks or water from their employer, the company Ingenio San Antonio (ISA). The effects of the disease are as devastating as its speed; at this rate, coffin makers stand to make more profits that the sugar producers.

The region has been dubbed the “Island of Widows,” and associations like La Isla are trying to resolve the problem through social programs and the support of people like Ed Kashi, who is using photography to get the local community involved and spare future generations from the illness.

Last January, victims and workers demonstrated to obtain compensation from their employers for subjecting them to potentially life-threatening working conditions. Their demands were ignored and research into the illness was abandoned. Ed Kashi has just completed a fundraiser on IndieVoice and is returning to document the problem, which extends to Mexico, Ecuador and even some Asian countries.

On the same subject is the work of Esteban Felix, a Peruvian photographer in Nicaragua. He recently won the Gabriel Garcia Marquez Prize for his series on workers affected by CKDu: http://vimeo.com/57969434