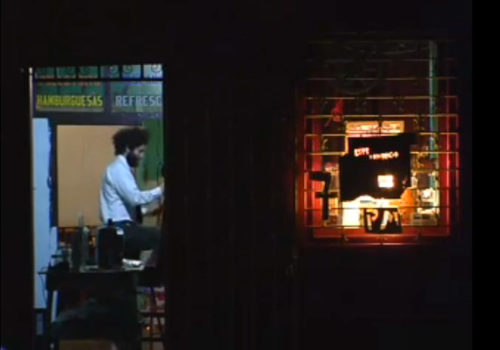 Ernesto Salmeron is a photographer, video artist and performer behind several initiatives to support audiovisual production in Nicaragua through educational workshops. In 2003, he launched E.V.I.L (Ejercicio Videasta Indio Ladinoameridiano), described as, “a community of video artists hoping to produce and distribute alternative videos outside of media channels.” This year the collective is holding a series of workshops aimed at young, local artists.

In 2006, Daniel Ortega was re-elected president and Ernesto Salmeron devoted himself to personal projects, never ceasing to question the role of visual memory is postwar Nicaragua. He revisited his thesis subject, “Auras of War,” reinterpreting archives and national codes to assert the political purpose of his artistic commitment.

In 2007, he presented an installation entitled Guerra colorida (War in color), a piece of graffiti using the new colors of President Ortega: pink and yellow, like a faded flag of the Sandinista National Liberation Front, of which he was a major figure in the 1980s and ‘90s.

“‘Reconciliation,’ ‘progress,’ ‘unity,’ and ‘peace’ were some of the words that emerged out of the pink backgrounds in Ortega’s campaign and subsequent presidency, suggesting a moment of coming together rather than division—a triumph not of Marxism or the Revolution, but of mindfully concerted forgetfulness about a present and a past marked by violence and social divisions,” writes Carla Macchiavello in an essay published by E-Misférica about the reappropriation of archives in the work of Salmeron. “In the context of Nicaragua, where the revolution has acquired a mythical status, historical memory is an issue highly guarded by the state, which over the years has promoted the creation of cultural deposits to preserve the revolutionary past.”

Recognizing the complexity at work in the construction of national memory and the role played by art, Salmeron produced in the following years several alternative documentations using all media at his disposal. For example, for ten years he photographed the crowd gathering at the Plaza de la Revolucion to celebrate the victory of the Sandinistas. He also relied on the image to record the oral memory of Nicaragua through his most recent collaborative research project, Taller Imagen Tiempo. Located in Jinotega, Nicaragua, three hours from Managua, “the space works as a base for countryside research on topics such as land reform, agricultural frontier and ethnic displacement within a context of high contrast and violent political debate where memory is a silenced vortex,” says Salmeron.

The result of this exploration of the region, featuring filmed meetings with musicians, artists and farmers, is both a historical document and an aesthetic experiment filled with life and humor.