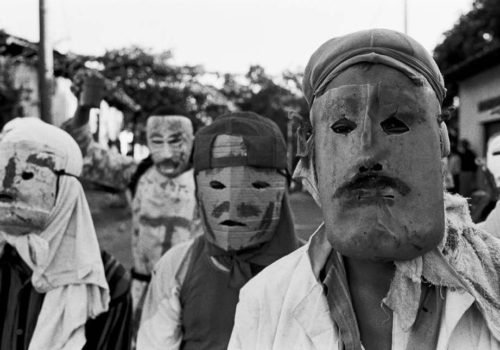 Along with her friend Maria José Alvarez, Claudia Gordillo is one of the rare classic documentary photographers in Nicaragua. Her work is field research into the cultural diversity of her country. In 1994, she won a Guggenheim Fellowship and developed a five-year project on syncretism in Nicaragua, where Spanish colonial heritage mixes with indigenous beliefs. The subject is important on a local level: the adjective “Christian” is included with the terms “social” and “solidarity” in President Ortega’s omnipresent slogan.

Indoctrination didn’t come with Ortega, and evangelistic campaigns have always relied on the proximity of codes and values between Christian and indigenous cultures. Current religious ceremonies contain vestiges of the pre-Hispanic mythology and their symbols answer each other: the cross represents Christ for the Christians and the God of rain in the form of the four cardinal points for the Nahuas.

The traditions blend together and some festivities use elements of religious folklore to mock the authorities of the colonial system. Cardboard masks, mustaches drawn with markers, parades, carnivals and legends liven up daily life. Street is often stage for a vibrant theater reminiscent of the country’s complex past. Accompanied by loud drums, La Gigantona is one of the most popular figures in Nicaragua. A large and sumptuous feminine silhouette, she evokes the indigenous, matriarchal structure as well as colonial domination. La Gigantona represents the Spanish woman, elegant and powerful, and the little man beside her with a large head is the “Mestizo,” the Métis, ignored and rejected.

Mixity of beliefs is a determinant social factor that defines hierarchical interactions among Nicaraguans. The autochtone system of value is still vividly respected, and a few pastors established in the northern mountains are living on the gifts of indigenous people with limitless fervor for their doctrine. By addressing the respective influences on each other and their consequences, Claudia Gordillo’s report allows viewers to identify the origin of certain traditions and understand the complexity of what happens when two cultures come together. This is especially important in a country where history has cyclically used this same argument to divide its people.