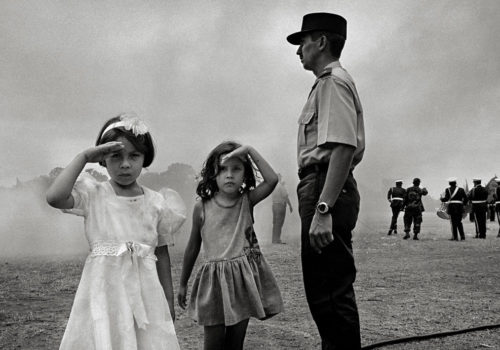 A few years ago, La Fabrica launched a collection of books entitled PhotoBolsillo, a series of monographs from eminent Spanish, African and Latin-American photographers. The books are small with soft covers and have biographies of the photographers along with a critical text. Each photograph is featured in a classic fashion and bears a caption, such as in a Photo Poche book.

Among the recent titles of the series is a black and white portfolio by Rafael Trobat. His work in Nicaragua over the past ten years is the result of his unwavering love for his country and its people, which he first discovered while working as an assistant to Cristina Garcia Rodero in the early 1990s. They became friends and her influence on him was determinant. “If it is true that an author reflects the mirror that forms his vital DNA in his photographs, Trobat distils kindness and empathy towards humankind, and seeks within emotion the vehicle to transmit the message that is implicit in his gaze,” writes Chema Conesa for the Trobat entry in the PhotoBolsillo collection, in an essay entitled “La pasión sostenida” (“Sustained Passion”). These words resonate with Garcia Rodero’s own: “I tried to photograph the mysterious, true and magical soul of popular Spain in all its passion, love, humor, tenderness, rage, pain, in all its truth.”

When Trobat first came to Nicaragua in 1990, the Revolution was more than a decade old and Daniel Ortega had disappeared from the political landscape. His liberal measures led him to be rejected by the Nicaraguan people, but his temporary absence couldn’t stop the neon signs of consumerism from spreading. The economy spurred cultural changes and social conflicts but the people remained loyal to their passionate temperament, a rule of conduct that seems to matter as much as religion.

The contrasts came one after the other, as clear-cut as his black-and-whites, with each event taking on a mystical aura in a country where religion, although contrary to the secular revolution and Marxist ideals, has remained deeply rooted. Children appear in his compositions making a wide array of faces and expressions we find on adult faces. Sexuality explodes in many of the images, as liberated as the joy and violence shaking the country. Trobat captures the signs in everyday situations, religious ceremonies, appointments at the hairdresser, drunken evenings, often oppressive and violent, but the appetite to live together is insatiable. In a recent photograph, two twins, age 7, celebrate their birthday together before a pile of muffins which they gulp down with delight.