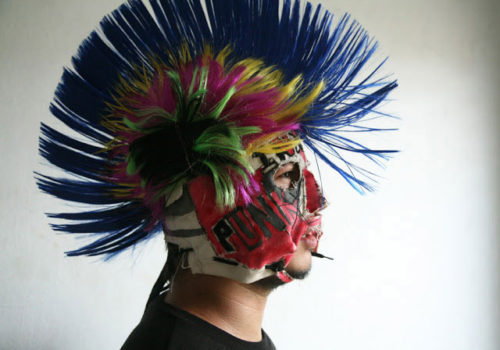 Alejandro Flores uses photography to capture a performance. His style borrows from the absurd to explore the complex subject of collective history. In the series Mascaras (Masks), he puts on nine different cloth masks which he made himself using waste, rubber, leather, canvas, velvet and wire. On one image, he wears a crest made of multicolored feathers and poses in  perfect profile. Written across the middle in large black letters on a black background is the word PUNK. On another, he wears a monochrome Spiderman mask embroidered with red thread. The other masks evoke warriors, indigenous ancestors and hard rock fans. “My interest in cults, clothing, armor, masks and body modification focuses on the ways the image of the body redefines the power relations between sectors and social groups,” he writes.

In the 2011 series Malabarismo monumental: La desconstrucción del símbolo, produced in Brazil and Nicaragua, he photographs himself with symbols of the above public power and uses commemorative statues as material. By photographing his climbing the monument, he creates a new statue, made of pweter and flesh, that tells another story. This is what he did to a statue of Somoza, which he reproduced for the Biennale and destroyed on opening day. The performance is a reenactment of the “Caida,” the name given to the tearing down of the statue of Anastasio Somoza in Managua during the Revolution of 1979, an event which marked the overthrow of the dictatorship. On Thursday, March 17, 2014, however, the statue was made of the plaster and the public spontaneously played the part of the protesters.

Coincidently in Milan, Italy, at the Brera Academy of Fine Art, another statue was broken by the public in name of history : inspired by a reproduction of a greek statue dated from the 19th century, the exalted visitor decided to climb on it and take a selfie. The legs of the Drunken Satyr are in tatters, but the climber is safe – so is his memory, if not that of his ancestors.