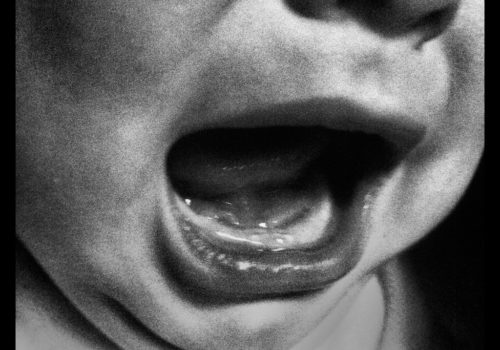 Maciej Dekert was born is Spain to a Polish father who shares his name and to whom he owes his passion for autobiography. A retired veterinarian, Maciej Dekert senior recently published his memoirs retracing the trip he took with his mother in 1968 from Cordoba to Hamburg and on to Yugoslavia to help his cousin Halina and her family flee the communist regime. He writes. His son takes pictures.

On a mottled image in a family album photographed by his mother, Dekert holds a plastic yellow camera up to his left eye. Thirty years later, he did the same with his Leica to document the birth of his daughter, Maria, in a hospital on the northwest coast of Spain, on October 16, 2012. This was the beginning of a long series that is currently simply referred to by the hashtag #fatherhood.

Fatherhood impose a subject and a language and Dekert turns his family and daily environment into the leitmotiv of an aesthetic quest. The fugacity of his new condition forces him to a new format, the square format of Instagram. In this frame, he reveals by hints a wide range of emotions and documents the world that deploys around him, the world that he has at hand, just like his phone.

Inspired by the square format, he bought a Rolleiflex, but doesn’t have the time to develop the film, so for now he engages in the risky genre of snapshots with his iPhone. One month ago, Dekert posted a photograph of his wife, Matilde, tenderly nursing Maria while letting out a large morning yawn. The light coming in through the window separates the image into a triangular composition common to classical representations of the bible. The caption reads “

#fatherhood #leon #nicaragua #hostel #casaivana#room #last_day #morning #window #bed #mother#yawn #baby #daughter #breastfeeding#gonna_miss_this_place. It was the day they were leaving the Casa Ivana, the temporary hotel that had become the family’s adopted home before they settled permanently in Léon, Nicaragua.

For one month worth of photos, these are the tiles of this hotel that serve as a background of Dekert’s visual records of ordinary times. Life spreads in his photographs as much as symbols. A photograph taken a year earlier features a pomegranate, plunged in the sun light and cracking under the pressure of its juicy seeds. A pomegranate, universal symbol for fertility. He captions the photograph #fatherhood, and adds the adjective #delicious. Such as the life that Dekert’s captures, the fruit is awaiting to be picked and savored.

His simple and loving language reminds us of what Emmet Gowin wrote in his Fine Art thesis statement to defend his photography, and particularly his choice to photograph his family: “Kisses are among the vehicles I would use if I were not able to make pictures.” And like Gowin, Dekert has created a series that goes beyond the family album.