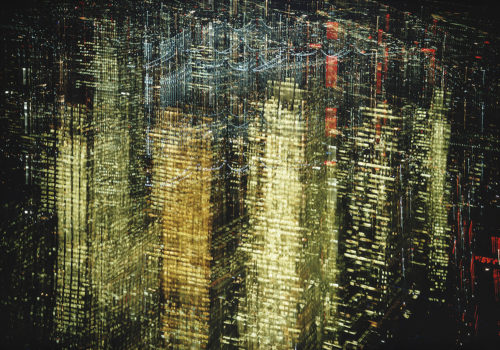 The Invention of a Language – Text by Jean-Jacques Ader

The three colored circles weave in and out behind the pillar of the church. At the top of the great room, they now follow the shape of the vaults and then continue rambling in an aerial and random way, a possible metaphor for an artistic freedom acquired by this red, this green and this blue, always in motion since the 70s.

The installation by artist Alix Delmas Cibles # 3 is part of this cycle, which began with the research of Ducos du Hauron, and the works of his heirs, which can be found in many on the walls of the historical monument in Agen.

This famous stranger, Louis Ducos du Hauron, is the inventor of color photography, even before the Lumière brothers, who used his research and subsequently succeeded in developing the autochrome. A native of Langon, Louis lived in Agen to the end of his life, he was a pioneer of modern photography, his work on trichromy is even the basis of digital photography.

It is therefore naturally in Agen that the centenary of his death is celebrated, in the form of a major exhibition “Inventing color” – the meaning of which evokes more the visual language which took off in the 1970s rather than the invention of the technique which offers among the most fervent practitioners of the photographic medium and is declined, not chronologically but in the form of six themes defining more precisely the works of the artists presented: inventing, experimenting, materializing, revealing, choosing, tinting. And the poster is rather enticing …

At the initiative of the association of the friends of Louis Ducos du Hauron, of the mayor of Agen Jean Dionis du Séjour and under the artistic direction of François Saint-Pierre (creator of L’été photographique de Lectoure, in the neighboring Gers) It is therefore an almost complete panorama of modern color photography which is visible at the Church of the Jacobins, another place of exhibition of the Museum of Fine Arts of the city.

From the enthronement of the color image in the art world, with the invitation by John Szarkowki of William Eggleston, who followed Ernst Haas, at the MOMA in New York, through Saul Leiter another pioneer, the programming also passes through the Europe of Luigi Ghirri and John Batho, and ventures among experimenters such as Jan Groover, Sammy Bajoli, James Welling or Philippe Durand.

Digital is represented, in different mediums, optical, chemical and physical variations, by Constance Nouvel, Vincent Ballard, Laure Tiberghien and Julien Richaudaud. Other artists preferring to play with the rendering of the light spectrum or its transposition on paper, modification of light sources for Denis Brihat and Paolo Roversi, colorization for Pierre & Gilles up to the Fresson process for Bernard Plossu, the only one according to him to agree with the Black and White.

It is a free journey over the last sixty years in photography, which will take you among these renowned or lesser-known artists, highlighted in the majestic architecture of the Jacobins, a real inventory of the world, in color, reminding us that each major step of technical innovation, autochromes, instant films, digital images, is accompanied by so many artistic adventures, experiences and innovations, even the diversions of these same processes, demonstrating if necessary the inexhaustible curiosity and desire to explore the human mind.

« Inventer la couleur » exhibition from July 3 to October 3, 2021 presented by the Musée des Beaux-Arts in Agen at the Church of the Jacobins – exhibition catalog published by Manuella.

At the same time, the Aurillac Art and Archeology Museum opened an exhibition “76/86” on the same theme of color photography, but focused on the decade 1976-1986. Stables rooms, Carmes garden, from June 24 to September 19, 2021.

Interview with François Saint-Pierre, curator of the exhibition “Inventer la couleur” presented at the Jacobins Church of Agen from July 3 to October 3, 2021.

François Saint-Pierre is one of the historical founders of L’été photographique de Lectoure (Gers) in 1990, closely followed by the art center of the same name; he directed it until 2014, rewarding this festival with its demanding programming, reaching far beyond local or national borders.

JJA : Where did the initiative for the Inventing Color exhibition come from?

FSP : First of all, it is the desire to celebrate the centenary of the death of Louis Ducos du Hauron, inventor of color photography who died in Agen, and of the association of  the friends of Louis Ducos du Hauron; its president Charles Sarion asked me to propose an event about contemporary photography. Several locations were considered until Jean Dionis du Sejour, the mayor of the city, asked us to carry out the installation at the Church of the Jacobins, which is dedicated to the temporary exhibitions of the Museum of Fine Arts in Agen.

JJA : Louis Ducos du Hauron, who lived in Agen, is rather unknown

FSP : Yes, he was a native of Langon but he spent a large part of his life here, and when he filed for the color photography patent he was living in Lectoure. Despite this, he was not a businessman, he was a scholar in his own world, devoted to his research. He always struggled to make a living, and his brother who was a magistrate helped him to support himself. His process was quite complicated to implement, reserved for scientists, and after having thought of putting a frame on a glass plate with the three primary colors, the Omnicolor was developed and marketed by the Jougla brothers who therefore directed the first company producing color plates in the world. Unfortunately, shortly after, the Jougla company and that of the Lumière brothers merged to offer only autochrome plates, which caused the disappearance of Omnicolor.

JJA: How did you find out about his work?

FSP : I think it was in 1990 or 91, through the intermediary of a Swiss artist that I had invited to L’été photographique de Lectoure, and I was  very impressed by this information at the time. . Shortly after, I therefore came to the Musée des Beaux-Arts d’Agen to meet the  curator, and asked her to see the photo archives of Ducos du Hauron, but they were not filed properly nor made available at that time. The town hall of Agen and the Musée des Beaux-Arts have made up for it since, by buying other photos for example, with the help of Joël Petitjean from the Niepce museum who did a lot of research on the subject, to manage to produce this exhibition which is of course a creation.

JJA : The title “Inventing color” refers more to the artistic process than to the technical invention itself

JJA : It wasn’t the first to exhibit color images there though.

FSP : No, twelve years before him, under the direction of Steichen, Ernst Haas for example had already been invited to hang his color photos. It was already very daring and he was one of the first to photograph modernity, but he was not considered a precursor of modern photography as Eggleston was, who laid the foundations which were then taken up by contemporary photographers. Daily life, banality, questioning the rules of framing etc … like Stephen Shore, who  unfortunately I could not get in my programming, who was exhibited just after at Moma, another representative of contemporary photography. From that point on, color photography ceased to be considered vulgar, as it was thought of  by the black & white purists.

FSP : There is of course a chronological axis, but it is mainly based on the six chosen themes: invent / experiment / materialize / reveal / choose / tint, and the photographers who represent it; all subject to the time and budget constraints inherent to the exercise. I brought together people that I knew well, like Eggleston whom I had exhibited at Lectoure or Mazdak who is in the Cnap collection, with others that I did not know at all, like Sammy Baloji, others still by visiting galleries. I did my shopping a bit like that, trying to put together a whole range, representing the diversity of the proposals of all these photographers. But the thing in common is that they are all experimenters, there aren’t really any that express themselves in a documentary way.

JJA : Has digital technology been as revolutionary as color compared to black and white?

FSP : It was revolutionary too, but not for the same reasons I think. Digital technology has facilitated and developed the distribution of images on networks, which can be good and bad, but it has not directly impacted artistic production. While talking with the artists, I realized that some of them are very happy with the new technologies; John Batho, for example, gave up cibachrome for digital, thanks to pigment inks. The same goes for Philippe Durand, who says he discovers his images during post-production and that he could not have had such quality with film. Nathalie Boulouch, who is a photography historian and who contributed to the exhibition catalog, writes in her book “Le ciel est bleu” that some photographers have rediscovered their works thanks to digital technology, which manages to restore certain colors, almost impossible to get with analogue photography.

JJA : The exhibition is probably not intended for travel, mainly because of the loans of works, but why not other editions?

FSP : This is something we thought about; the idea is to be explored. The concept of inventing the language of color photography can be kept, and rolled out in a new edition, along with other artists and other experiments. To be continued …

presented by the Musée des Beaux-Arts in Agen at the Church of the Jacobins.

November 27, 2021 from 8h00 to 17h00, in the presence of many guests such as Alain Aspect physicist, Bertrand Lavédrine professor at the Museum of Paris, Nathalie Boulouch historian in contemporary art, Joël Petitjean doctor in history of art etc… infos :