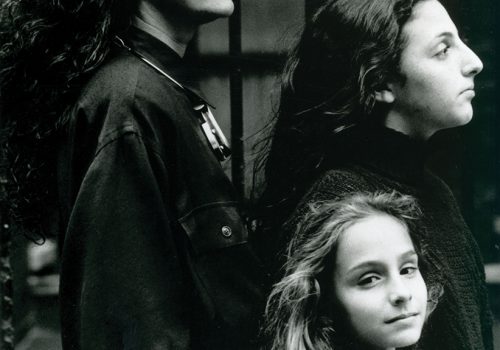 Sheila Metzner is a true grande dame in the world of photography. As the first female photographer to collaborate with Vogue magazine on a regular basis, and the first woman to be promoted to art director of an ad agency back in the 1960s, Metzner has always been ahead of her time. This makes it all the more surprising that her images evoke the beauty and atmosphere of times past, despite her contemporary subject matter. Now, for the first time ever, Metzner’s works will be shown in Germany as a comprehensive solo show – and on top of that, together with the work of her long-time friend, Helmut Newton (along with that of Joel Meyerowitz and Evelyn Hofer). This was more than enough reason to meet with her and chat about her work, her show at the Helmut Newton Foundation, and what’s new?

Nadine Dinter: After college, your first career steps were in world of advertising, back in the 1960s. Among the artists you cooperated were Diane Arbus and Richard Avedon. What are your memories from those first encounters and collaborations?

Sheila Metzner: Diane Arbus and Dick Avedon were close friends. I think I met Diane and her camera on the only peace march I ever attended. I met Dick when Melvin Sokolsky sent me to his studio on a go-see as a model. I was not a model, I was an art director. These chance encounters led to many years of both collaboration on advertising projects, but even more to rare friendships. Diane never asked to photograph me, but Avedon did our wedding portrait.

How much artistic freedom did your advertising job grant you, compared to your later artistic career? Was it tougher to be successful as a woman in the ad business, to prove the value of your work and to gain recognition for your achievements?

SMetzner: My husband Jeffrey was a Creative Director at Doyle, Dane, Bernbach, the most innovative and successful agency in that time. He brought my portfolio to the head of his department. That was Dick Loew, who said, “Jeff, this guy is great!” Of course, Jeffrey replied,” Dick, it’s not a guy it’s a girl.” They hired me for my work not my gender, making me the first female art director they ever hired. I did have a small battle for equal salary, which I easily won. We had greater freedom at Doyle, Dane, Bernbach than any other agency at that time. The only true freedom an artist has, is working for himself. Or should we say herself?

I’ve read that you were inspired by Julia Margaret Cameron to venture into photography. What are your other sources of inspiration and idols, if there are any?

SMetzner:  I believe Edward Curtis was my first life changing inspiration. When I saw his portraits of American Indians, many years ago at The Morgan Library. I said to myself, “Oh. This is what photography can be.” My kids went to the Steiner school on 79th St and 5th Avenue, so on rainy days we often visited The Met, The Guggenheim and the many galleries, at the time, on Madison Avenue. My husband and I, when we were in the city spent many Saturdays doing the same. There was and is, also the awe-inspiring Museum of Natural History. Apart from Curtis and Julia Margaret Cameron I studied Steichen, Stieglitz, Weston and Man Ray, Frantisek Drtikol, Francis Bruguiere and the Italian Futurists. Art, of course as well. Van Gogh. Gauguin, the Mannerists, Leonardo Da Vinci, Michelangelo, Sargent and Whistler. I could go on! Art, literature, nature, music, friends and family.

One day after leaving the Guggenheim, while crossing 5th avenue, I said to myself, “That’s enough. You’ve seen enough, now, get to work.”

Your first photographic subjects were members of your own family. As a mother of seven children and wife to an artist (Jeffrey Metzner), you had a home full of motifs, ideas, and 24/7 inspiration. Was working with your family easier or more difficult than working with people outside your inner circle?

SMetzner: My husband, and his children, and our children, continue to be a source of inspiration. I am currently working on a series of my 14 grandchildren, and just finished a new series of flowers from my garden. It’s almost the same working with those I am assigned to photograph. I study their work, their films, or writings, or fashion. Whatever they do in life. I try to get to know them, and to photograph them as they wish to be seen. My husband, my greatest muse, died about 12 years ago. After 44 years of marriage. He remains my most intimate friend, and inspiration.

Your daughter Bega is depicted in many amazing images (e.g. Bega Peppers, 1982), which we can also see in the exhibition America 1970s/80s at the Helmut Newton Foundation. How does she feel about those images today?

Bega’s reply; “I love each and every image like a flashback in time travel. So many of the photos that my Mom took remind me of exact instances in my childhood of a time and place filled with beauty, serenity, fantasy and imagination… Real life fairy tales I wish I could return to, as well a very distinct memory of how my Mom placed me and the objects in the setting. Now that I am older and a mother myself, it is also a somewhat surreal feeling because although I can place myself in the images I don’t see ‘myself’ when I look at them. I see beautiful, inspiring photographs of a young girl or a strong woman that are truly timeless.“

During your career, you’ve worked with numerous iconic artists, such as Robert Mapplethorpe and David Lynch, beauties like Paloma Picasso and Isabella Rossellini, and “kick-ass” actresses like Tilda Swinton and Uma Thurman. Would you share a few anecdotes with us? Who was easier to work with, who was more difficult to work with?

SMetzner:  Robert Mapplethorpe, David Lynch, Paloma Picasso, Isabella Rossellini, Tilda Swinton, Uma Thurman, Warren Beatty, John Huston. Human Beings, like these, of such character, are neither easy, nor difficult. All brilliant professionals. What could be a greater privilege, than to meet, one on one, face to face, with these extraordinary talented individuals. Each meeting, or sitting, or social encounter, is too long a story to tell. For some divine reason, we met as longtime friends, and equals, and worked intimately, with respect and dignity, collaborating with both depth and humor, and, I might add, passion.

Speaking of anecdotes: you’ve been a long-time friend of Helmut and June Newton. How and when did you meet them? Did you ever collaborate professionally or is it strictly a private friendship?

SMetzner: Oh…Helmut and June. Magic! I met them in many places. Both of them at the Chateau Marmont, in Los Angeles, where they lived during the winters, and I was staying there. Helmut, mostly at our shared gallery, Fahey/Klein, or a lab, or at an event or opening, until our shared week in Monte Carlo when I was assigned to photograph their life at home. Then, when June (Alice Springs) came to photograph me, at my home in New York with my children. They were inseparable as a couple, and bold, hilarious and fun to be with as individuals. So unique and impossible to define. I hope I captured whatever they radiated, in my photographs of them.

I grew up with the breathtaking campaign you shot for Fendi Perfumes. The main photograph depicts a fragile female beauty, kissing a marble sculpture. How did you come up with the concept for that?

SMetzner: The inspiration for Fendi came from the Elizabeth Arden Creative Group. It was a sketch, of two full length figures, in a sculpture, of the Pygmalion myth, in which Pygmalion was a sculptor who fell in love with a statute he had carved. Further inspiration came from Karl Lagerfeld. He sent huge mood boards of images depicting the art and colors of Rome, which he titled, “The Passion of Rome.”

We had ten days in Rome to make one image. Of course, we did many more. The Campidoglio is one other great example. Most of the photographs were printed by Fresson, published in advertising, displayed in the windows of Bloomingdales and made into the Bloomingdales famous shopping bag. We went back to Rome three years later for Fendi, Uomo. Marie Sophie was the model again, same earring, same hair. As in Pygmalion, the statue comes to life.

You are known for your Fresson prints and a style that evokes an atmosphere of pre-Raphaelite sensuality, carefully staged settings, and a special mood that transports viewers into the past or takes them on a dreamlike journey. Please share with us a little bit more about your way of working and how you select your settings and props.

SMetzner: Over the years, I continue to find myself surprised that all of these photographs appear to have been taken by the same person, at the same time. Whoever that person is, she exists both separate from me and deep inside of me. This is work. My work contains everything I love. It is all in each photograph. No darkness. No despair. No evil. No fear. Love chooses the settings. Love chooses the props. It is both the myth and the reality of my existence. My life on earth, to share. At the same time, it is a document and an homage to all that has inspired me.

What is your advice for the next generation of aspiring photographers in terms of “making it” on the art market, solo shows, and growing your fan base?

SMetzner: Be yourself. Stay apart from the art market, until you create a body of work for yourself. Keep it for yourself, your friends, your family until you recognize it as your own. Then it will be yours to share. Treat your work as sacred.

Thank you, Sheila for this truly inspiring interview!

Alongside the works by Helmut Newton, Evelyn Hofer and Joel Meyerowitz

More about Sheila Metzner´s work, life and career at: https://sheilametzner.com/