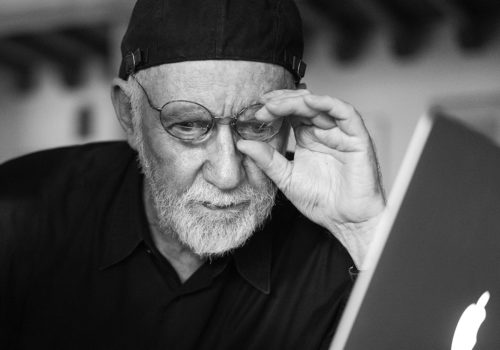 Originally from Scotland, Albert Watson has been making his mark on the art of photography for almost half a century.

He studied graphic design at the Duncan of Jordanstone College of Art and Design in Dundee and at the same time studied film and audiovisual at the Royal College of Art. Despite a failing eye, he decided to study photography as well, which he practiced as an amateur until the 1970s.

When he and his wife Elizabeth decided to move to the United States, Albert met one of the artistic directors of Max Factor, for whom he agreed to do a photo test. The result was conclusive, as he sold two of his photographs to the brand. His style immediately attracted the attention of the biggest American and European magazines.

The frequent return trips between New York and Los Angeles started. His first personality portrait was of Alfred Hitchcock, holding a dead goose by the neck. The shot was featured in the Christmas issue of Harper’s Bazaar, so the stakes were high for this young photographer fresh out of film school. This image marked an important turning point in his career and became one of his most famous portraits … among hundreds of others of course. From then on, he immortalized rock stars, Hollywood icons, rappers, supermodels, the Clinton couple or even Queen Elizabeth II.

In 1975, he decided to move to New York where his work was increasingly in demand. There, he directed hundreds of advertising campaigns and commercials for brands as diverse as Gap, Levi’s, Revlon, Chanel…

At the same time, he continued to expand his visual universe and started working on large-scale personal projects, drawing inspiration from his travels to Marrakech or Las Vegas in particular.

His photographs are as provocative as they are aesthetic. His visual language is characterized by very marked contrasts. The lighting that he set up, translated an extreme mastery of the technique of highlighting subjects, more specifically the fetish objects and models, it created an atmosphere that invites meditation.     Recognized as the master of his art, he has won numerous awards including three Andy Awards for his advertising and a Grammy Award for his body of work.

Today he is one of the most influential photographers – alongside Annie Leibovitz and Irving Penn, Albert Watson’s images are regularly exhibited in galleries and museums around the world.

While Albert Watson still lives and works in the West Village in New York. His studio, which hosts private exhibitions, is also home to his archives, in the form of millions of prints and negatives that document his exceptional career.

Albert Watson: The very first time I touched a camera I was 15 years old, and I took pictures of my youngest sister with my father’s Brownie. Then I was about 22 when I got back into photography as part of my studies.

The photographer who inspires you ?

Albert Watson : I didn’t really have a photographic culture at the beginning and I was more interested in the technique, I was particularly fascinated by what could be done in the darkroom, because what mattered most to me at that time was the graphic arts. But little by little in the years 65,66,67, I studied the work of other photographers from all walks of life and styles, among them Eugene Smith, Richard Avedon, and Irving Penn. At that time I was also very fond of European photographers like Rodchenko, Julio Cortes, and Brassaï. So to answer your question, there were many of them that inspired me in the beginning. I functioned like a sponge, I absorbed everything I could to feed my imagination. I am still interested in many things today.

Albert Watson: I remember an incident that happened a few years ago, it was a nice moment. It was in China in the 70’s, I was taking pictures in a school where they were training gymnasts, and I remember this child who was only 5 years old taking my hand and speaking to me in Chinese of course, my translator explained to me that she wanted me to take a picture of her while she was performing a trick on the beam. In the background there was the portrait of Mao hanging on the wall. She climbed on the beam, her body position was incredible, everything was perfect, her hands, her arms, her legs, and for a long time she held her position without moving. It was not an extremely spectacular picture, but it is still important for me because it was a very moving moment for me.

Albert Watson: It’s hard to talk about one image. I’ll tell you about a situation in which I was angry with myself. It was during a shoot for an international Estée Lauder campaign, I remember the model, we did a Polaroid test, I was quite happy with the result and I showed it to the D.A. at Lauder who liked it but was not convinced by the shirt the model was wearing so she went to change. But this change was not just about clothes, it also involved a change of hair and makeup… and everything went well. And at the end of the session, the D.A. looked again at the first Polaroid we had made and asked me if I had taken any pictures of this outfit, to which I replied that I hadn’t because he didn’t like the shirt… and he said: “that’s a pity, because it’s the most beautiful picture of the day for me”. At first, I thought to myself, it was his decision. But the more I thought about it afterwards, the more I was angry with myself, because from the beginning I knew this was the right picture, and while the Polaroid was developing, I could have easily made a few images and we would have had it! In the end, I was so upset with myself, that I never let it happen again. It was a lesson!

What is the necessary quality to be a good photographer ?

Albert Watson : For me it must be simple and memorable. It has to have that extra something that gives it power.

Albert Watson: My first camera was a gift from my wife. It was a Fujimatic.

The one you are using now ?

Albert Watson : In the first sense of the word, I have never taken drugs. But I’m still very British and there’s nothing better than a good cup of tea and a good movie. Traveling is also one of my favorite drugs.

Albert Watson: I inherited it from my father: I am very patient

Albert Watson : It would be great to put on it the portrait of the scientists who worked to find the vaccine against Covid 19.

Albert Watson: When I was young, I worked for a cleaning company. My job was to remove grease from walls and I must admit that I didn’t like doing that at all, it was very depressing, the days were endless, and I don’t even want to talk about the smell… That’s something I did and I wouldn’t want to do it again for anything. But if I had to name one job I would not have liked to do, it would have been a surgeon, the idea of incising a body is unbearable to me.

Albert Watson : During a fashion shoot a few years ago, I asked to be bought a wind machine. I kept it until recently.

Albert Watson: Because of my obsession, I may regret having worked so much and not taking enough time to enjoy life as much as I should have.

Albert Watson: Instagram, it allows me to share my work with as many people as possible. I have a lot of archives, and there are also my books, my personal works, etc…

Albert Watson : I like both with a very slight preference for B&W.

Albert Watson : Here again I like both. In studio, the technique is more important.

If God existed, would you ask him to pose for you, or would you take a selfie with him?

Albert Watson: It would be fun for me to do his portrait and I would leave it up to him to do his own lighting.

“Creating Photographs” published last May by Laurence King Publishing, a book in which he offers his expert advice for success in the profession.