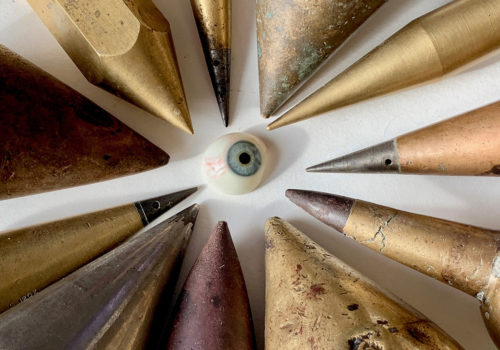 Complements: eloquence of small objects is a mélange of juxtapositions, contrasts, clashes, and harmonies. And that’s just the first illustration! When I was sent the layouts for this book I was struck by what an imaginative and powerful piece of work it is.  I originally saw many of the photos on, where else, Facebook. They were posted over a year’s time as single images, almost in real time as they were produced.  On their own the photographs are original and stunning, but by convening them in one place, Patricia Z. Smith has conjured up an artistic tour de force with her work.

She told me that Complements, “is not about technique, though most of the photographs required more or less complex set-ups, some ridiculous-looking with wires coming down from clothes hangers, a bra and spider hanging from a branch, a butterfly atop a feathered scull. Because I preferred naturally lit images, they needed to be moved as the light coming in the windows changed.”  I can only imagine her scrambling around to catch the last rays before the sun set. As a fellow photographer I know the feeling. Life for us is the pursuit of the right light.

The text for the photos emerged after the photographic work was done, and weaves a magical web that perfectly melds the images together.  It was amazing how those narratives developed between words and pictures, almost like reuniting brothers and sisters separated at birth.

Patricia said, “The images came easily to me. Some of them like the fish in the bowl, the mouse in the maze, the bull horn through the wallpaper, and the flowers hanging from the clothesline, materialized as unsummoned complete images, and I simply brought the objects together.”  In other words, when Michelangelo was asked how he created one of his finest masterpieces, he supposedly answered, “It’s easy. You just chip away all the marble that doesn’t look like David.” This of course, didn’t happen, but it’s a good story and goes to the artistic mind creating something out of nothing.

She went on to say, “Since earliest childhood I have searched to find, reveal, convey what I sense is behind the tangible.  And I ponder why others don’t seem to search for that insistently. We live on a thin sheet of dimensions, time, and physicality as though that is all there is.  It confounds and irritates me.  I want the photographs to hone and enlarge the viewers perspective. How is it that objects stimulate emotions and thoughts and memories in us?  What is that language? Why when objects are juxtaposed do the emotions, thoughts, and memories they convey become more complex, become a storyline—more than the sum of their parts?”

In my world, and I describe myself as an old-fashioned wire service photographer, our mission is to accurately document reality. Patricia’s reality is one of her own creation and a product of her vivid curiosity.  She is driven to see what is around her, tossing things and thoughts in the air to see where they land. In this cosmic toss of the dice, Patricia has rolled a winner.

Louise Brody has designed more than 100 books for a variety of leading British, American, and French publishers, museums, and the international press, as well as working with private clients to produce publications for important events or to commemorate achievements.

David Hume Kennerly is a Pulitzer Prize-winning photographer and was the White House photographer under President Gerald Ford. He has photographed eight presidents, and historic events around the world. His photographs are icons of American history.