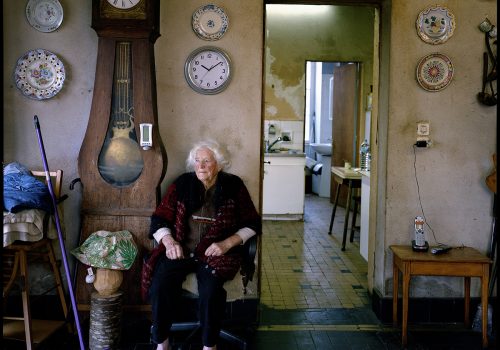 Photographers Eric Bouvet and Yan Morvan exhibit more than 80 portraits of French men and women from their photographic campaign carried out for 2 years in France, at the train stations Paris Gare de Lyon and at Avignon-TGV from June 25 to September 1.

Eric Bouvet and Yan Morvan are photographers and journalists. Their involvement in documenting political, economic and social facts since the 1980s, their experience in difficult terrain, their notoriety as photographic authors make them privileged witnesses of our history.

The HEXAGONE exhibition was to be held as part of the 2020 edition of the Rencontres d’Arles, canceled due to the pandemic. SNCF Gares et Connexions, with its experience and know-how, has chosen to design and co-produce tailor-made exhibitions to present the work of these two photographers in the stations. This project was made possible with the support of the Ministry of Culture, BNP Paribas, BMW France and the National Agency for the Cohesion of Territories.

A project, a vision

Being French ? The two artists, Eric Bouvet and Yan Morvan, went to meet men and women for two years and asked them the same question, over the course of 60,000 km traveled throughout the metropolitan territory, from the political break of the 2017 presidential campaign to the trauma of the Covid-19 pandemic.

The subjects chosen form, once assembled, a fresco of France from the years 2018-2020. Thus are portrayed the hopes, the struggles, the great changes but also the challenges in a period of paradigm shift through the eyes of these two great artists.

The decision to use a large format camera for its technical qualities, the durability and rendering of the prints is essential in this heritage approach which aims to be contrary to all digital but also concerned with the conservation of images.

“What portrait then emerges of this France today?

To put this theme into images, Éric Bouvet and Yan Morvan did not randomly choose the most historic and monumental of cameras: the 20×25 camera. With infinite precision in the transcription of colors and details, the negatives will still be legible a 100 years from now. In this era of selfies and furtive images, it is about taking your time, posing and listening.

These specifications are important, because they say everything about a respectful, ambitious project, which leaves it to the French to introduce themselves. To represent oneself. And to speak too, since the photographers have gathered a bouquet of commitments, torments, anger, pride. The faces are plural, the voices are choral. A base and fractures are emerging. From the national novel to the multicultural fresco. From emancipatory history to the ideological battlefield.

France, then? Is it a territory, a heritage, a language, a climate, a fiction? For the historian Michelet two centuries ago, it was “a soul and a person”. ”

An exhibition at Paris Gare de Lyon and Avignon-TGV

The exhibition will be presented at Paris Gare de Lyon on the forecourt and in the Salle des Fresques as well as at Avignon-TGV from June 25 to September 1 with the support of SNCF Gares & Connexions, the SNCF subsidiary in charge of management and the operation of 3030 French train stations.

More than 80 portraits and their words will be presented, which show the commitments, struggles, hopes and great changes at work in French society.

60,000 km traveled in France by the two photographers.

300 working days and meetings that took place during 24 months after a year of preparation for the survey.

900 20 x 25 film sheets were used for this photographic mission.

Why the large format camera?

To get out of the digital emergency or that of the the press, they decided to take the time for a long-term investigation and especially to use a 20×25 photographic camera. This technique requires a slow construction of the images and makes the photographic act visible. It also allows for sustainability of the images and high-quality rendering, which underlines the attention they wanted to pay to each person encountered.

The Deardorff 8X10, a model from the 50s, gives a 20X25 cm negative of unequaled quality and finesse. The device, whose brand was created in 1923 in Chicago, is made of wood and leather and weighs 6 kg. With the tripod, the chassis, the lenses and the rest of the necessary equipment, you quickly reach 20 kg. It is the device of great photographers such as Ansel Adams, Irving Penn, Richard Avedon, Stephen Shore, Joel Meyerowitz, Paolo Roversi, Massimo Vitali.

Eric Bouvet born in 1961, after studying arts and graphic industries at the Estienne School, he became photojournalist in 1981 by joining the agency Gamma. Independent since 1990, he covered the biggest world events and most of the conflicts that change the course of history (Afghanistan, Chechnya, Rwanda, the Middle East, fall of the Berlin Wall, Somalia, Iraq, Libya, Tienanmen, Russian commandos…). He publishes his reportages in the biggest international magazines and turned to documentary photography, of more contemporary inspiration.

Man is always at the heart of his subjects, his photographic approach is as close as possible, respectful and incisive. Very committed to the young generation, he is committed to transmitting and sharing his experience. Numerous awards recognize his commitment, including two Visas d’Or, five World Press, the War Correspondent Prize, the Frontline Club Award, etc.