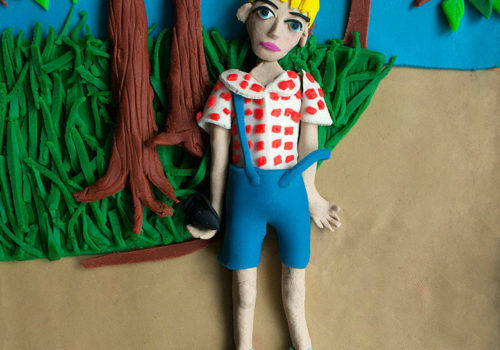 I have a simple, naïve love of photography and I hope this is reflected in this series. It’s my strange tribute to photography.

Photographs Rendered in Play-Doh started on a whim in August 2013 following a photo pub quiz run by the artists at MacDonaldStrand in Brighton. One of the rounds was to make a reproduction of a famous photograph using Play-Doh. It is said that you only need one good idea in life. I didn’t have one, so, in the spirit of post-modern re-appropriation, I used theirs.
My tools are amateur. Play-Doh, a chopping board, a scalpel and an empty wine bottle as a rolling pin. The work is accessible, easy and inexpensive to make. The audience is wide and the whole project is a testament to the democracy of the web. Although I have a strong following amongst professional photographers and curators, my blog is viewed by thousands of people all over the world  as far afield as the Congo, Mongolia, Bolivia, Kazakhstan, and Iceland who aren’t involved in photography.
I have few rules for the project, the main ones being no pornography and no dead people – those subjects just don’t seem appropriate in Play-Doh. I also don’t like to render photographs that photographers have requested of their own work.
I’ve worked promoting art and photography for over 10 years, but always promoting other people’s ideas – curators, galleries, museums and publishers. Through the blog I can decide what I want people to view, and I can highlight obscure images by overlooked photographers, or contemporary projects I think are worth seeing. It’s extremely liberating, as I don’t have to justify my choices. I just present them in Play-Doh, linked to the original image, and my work is done.
In my day job I’ve often found myself removed from the artwork, consumed by pressures of deadlines, egos and politics. I regularly question why I started working with art and photography in the first place. This project brings me back to an unpolluted view of photography. We each view hundreds of images a day on phones, computers, on billboards and in newspapers; but we never really look. We scan the information in the image, take what we need and move on. I hope that this project encourages viewers to slow down and to re-engage with familiar works as well as discover the unfamiliar ones.
I’ll be the first to admit that the early images in the project aren’t very good. I am not an artist and gave up art at school when I was 14. Each photograph I remake in Play-Doh takes a couple of hours. This time is spent looking at the image, studying its composition and lighting, and deciding which bits to highlight and which to leave out. It’s a chance to slow down, look and to really examine a picture. On the surface, photographs can condense complex ideas and present them in a straightforward visual language. I take this a step further and pare them down to almost nothing, just form and colour only.
After I have finished a work, I shoot it and immediately take it apart, returning the Play-Doh to respective colour pots to re-use. The green dress in the Nan Goldin became the jumpsuit in the Alec Soth, the foliage in the Tom Hunter and the blanket in the Henri Cartier-Bresson. The works no longer exist, they become ephemeral, and I am usually the only one who has ever seen them in their three-dimensional state.
I like the idea of a Chinese whisper through time.. from the original subject of the photograph, the photographer’s print, a digital file on the internet, a play-doh model on my table, my digital file on the internet and now the works on a gallery wall. What is lost and what remains? I never said it was serious. They are what they are. Photographs Rendered in Play-Doh.